Nestled in the North Georgia mountains just outside of Helen sits a building that’s been working in tandem with the Chattahoochee River for 145 years. While the outside has undergone a few changes, Nora Mill Granary still grinds corn on the very same 1,500-pound French Burr mill stones installed by John Martin in 1876.

A goldminer who settled in Georgia, John Martin knew a thing or two about milling. Wealthy enough to afford the very best in late 1800’s technology, John Martin purchased a cast iron turbine for his mill.

“A turbine is 80 percent more efficient than a paddle wheel, and costs a lot more money. He also purchased pink granite burr stones from France, and there’s nothing that compares to that pink granite. They are the same type stones that George Washington used at Mount Vernon,” said Tommy Martin, who’s been the miller at Nora Mill off and on since the 1980s.

No relation to the mill’s founder, Martin does have ancestors who were millers near Sweetwater Creek State Park. Having worked as a mental health counselor, firefighter and other jobs throughout his life, he’s found milling to be his preferred labor of love — just like his forbearers — and just like those who have come before him at Nora Mill.

In 1902, the mill was purchased by Lamartine G. Hardman, who would later become the governor of Georgia. He named it Nora after his little sister who had passed away. Someone who Martin called a “very wealthy fella,” Hardman added a generator under the building in 1911, making it one of the first buildings in White County to have electricity. The house across the street, part of John Martin’s original home, became home to almost every miller since Hardman. 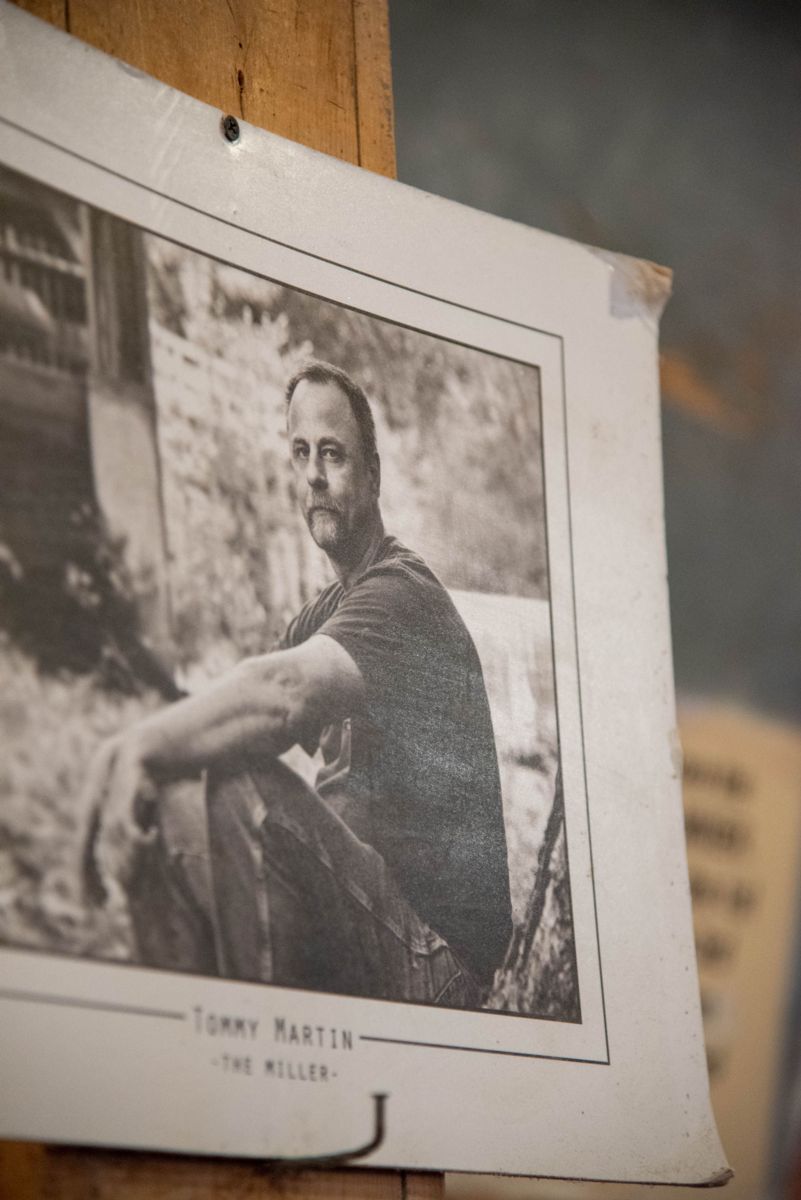 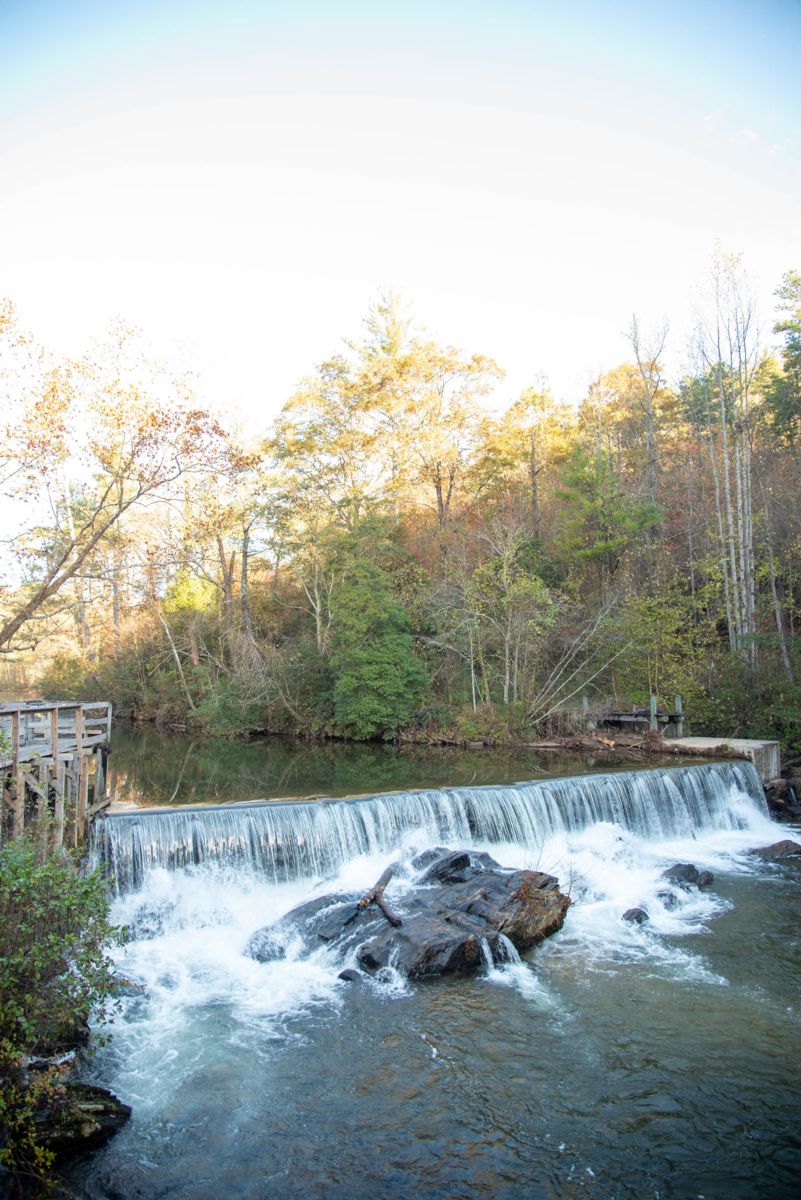 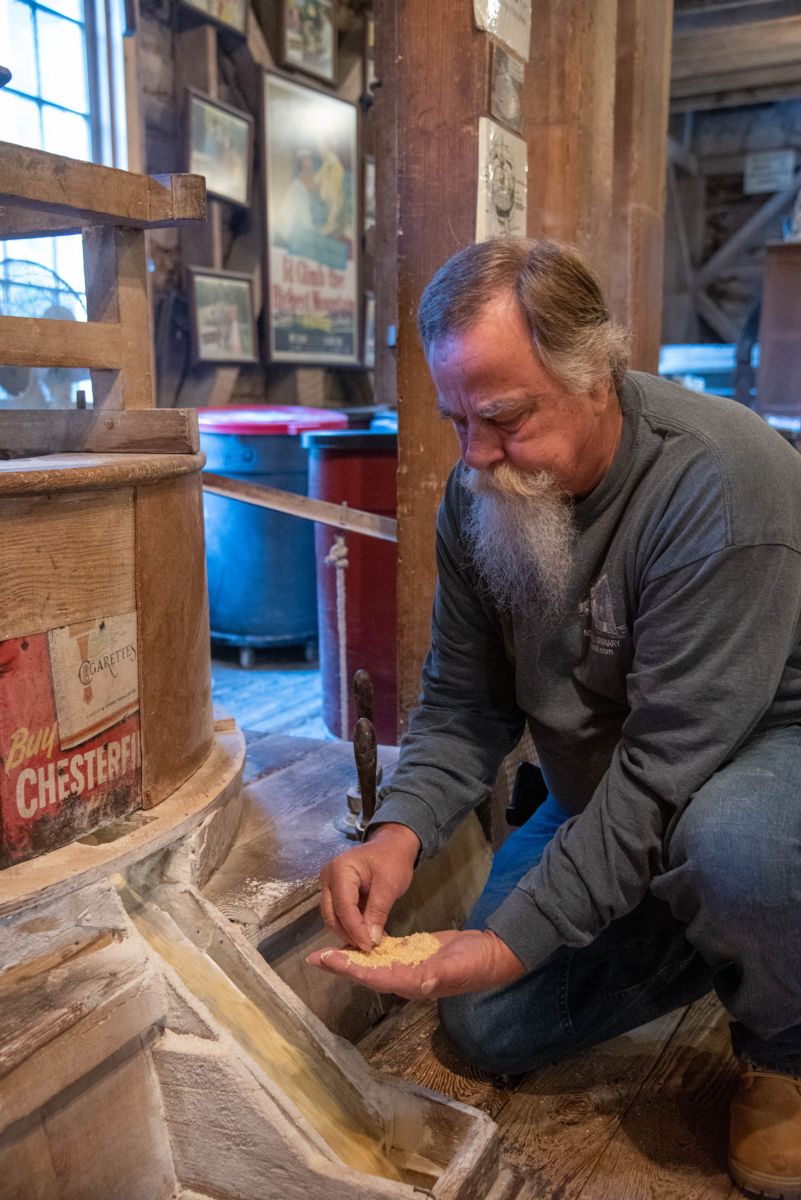 After a succession of millers throughout the years, in the early 1980s, Retired Army Lieutenant Colonel Ron Fain leased Norah Mill from the Hardman family and it has been his family’s work ever since.

“Ron got it going for his father to have something to do in his later years,” Martin said. “I showed up in about 1989 and he put me in charge of doing whatever grandpa said. I started milling and learning the history of the area from Grandpa Fain, and I still haven’t left.”

One of the main reasons Martin has stuck around so long, through four generations of the Fain family, is because he believes that for milling, doing things the old way is best, and the cornmeal — all natural with no additives — is the best tasting meal on the market.

“That’s the key to what we do. We offer whole-grain products and we do not de-germinate to mass produce. The way a lot of commercial cornmeal is made, the germs are taken out and sold separately. Then, they turn around and enrich the product with manmade chemicals. I don’t want chemicals in my food,” he said. “Stone-ground, whole-grain cornmeal has such a different flavor and moistness, because it still has the oil in it.”

Martin’s opinion on the matter is so strong, he’s been known to convert busloads of Northerners into grits lovers.

“I like to say that I’m a grit counselor. I walk people through their fear of grits,” he said with a laugh. “We get tour buses from Ohio and other Northern states full of people who swear they won’t even touch grits. Then they try ours and they love them. One thing I love most is educating young kids about milling and also the look on people’s faces when they taste our product.”

As he’s educating the visiting youngsters, Martin explains that Nora Mill produces and packages their products much the same as they have been for generations.

“We package in cloth bags, and when I’m there working with young people, I explain that we didn’t just throw things away back then. People would use and reuse and reuse again. And when they got too thin, granny made a quilt out of it. Stuff was made to be reused.”

Plus, he said, people love the nostalgia of the cloth bags in which the cornmeal and grits are sold. Visiting the granary, tours of the working mill are regularly offered, and many folks enjoy feeding the rainbow trout in the river. In the adjacent country store and gift shop, visitors can purchase mill products and other specialty items like syrups, jams, pancake mix, cast iron pans and more. The small kitchen has samples on offer. The hottest commodity is always grits. In fact, grits are Nora Mill’s national best seller.

“We ship thousands and thousands of pounds of grits all over the U.S. Shaq owns a restaurant in Los Angeles and we send grits to him. He wanted ours specifically, although I have no idea how he found us,” Martin said, adding that 2,000 pounds are sent regularly to Las Vegas, Florida and New York. “You wouldn’t think nobody up North would eat grits, but there’s a shrimp and grits craze and they’re learning about store-bought versus whole-grain grits. Our pure, whole-grain grits are a night-and-day difference and they make completely different tasting shrimp and grits.” 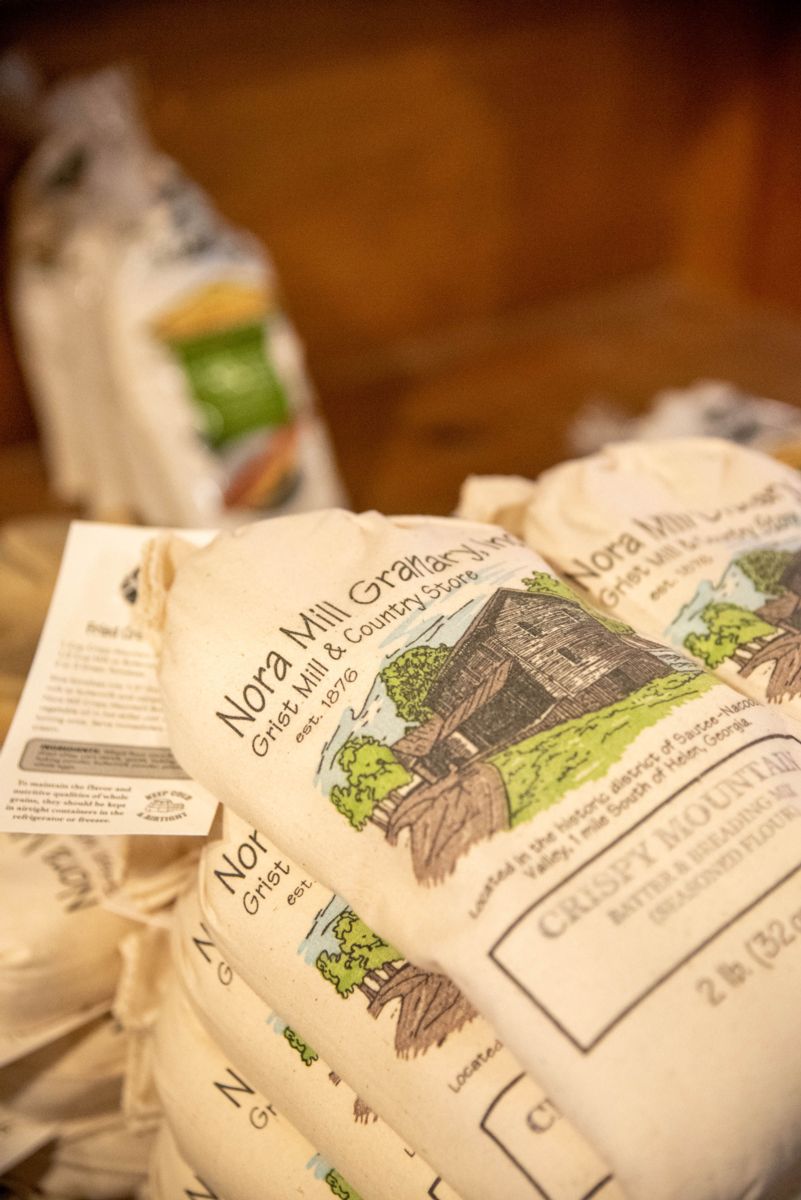 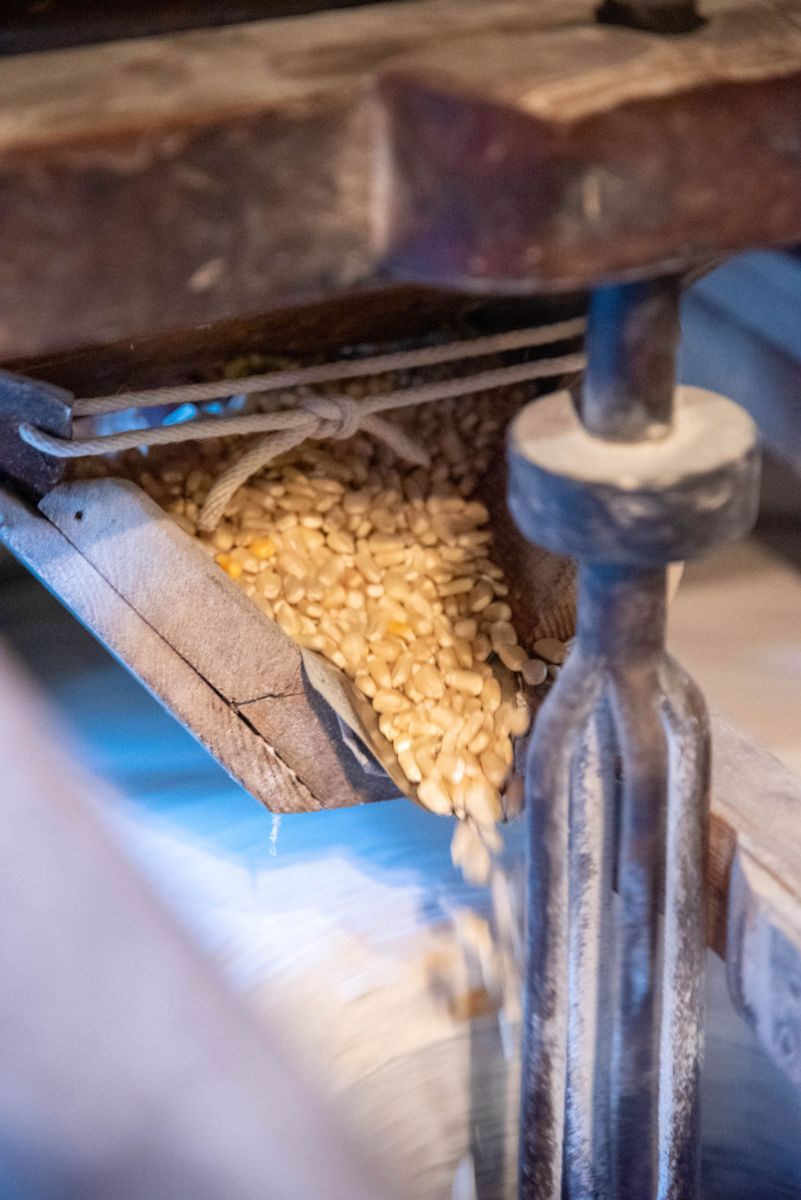 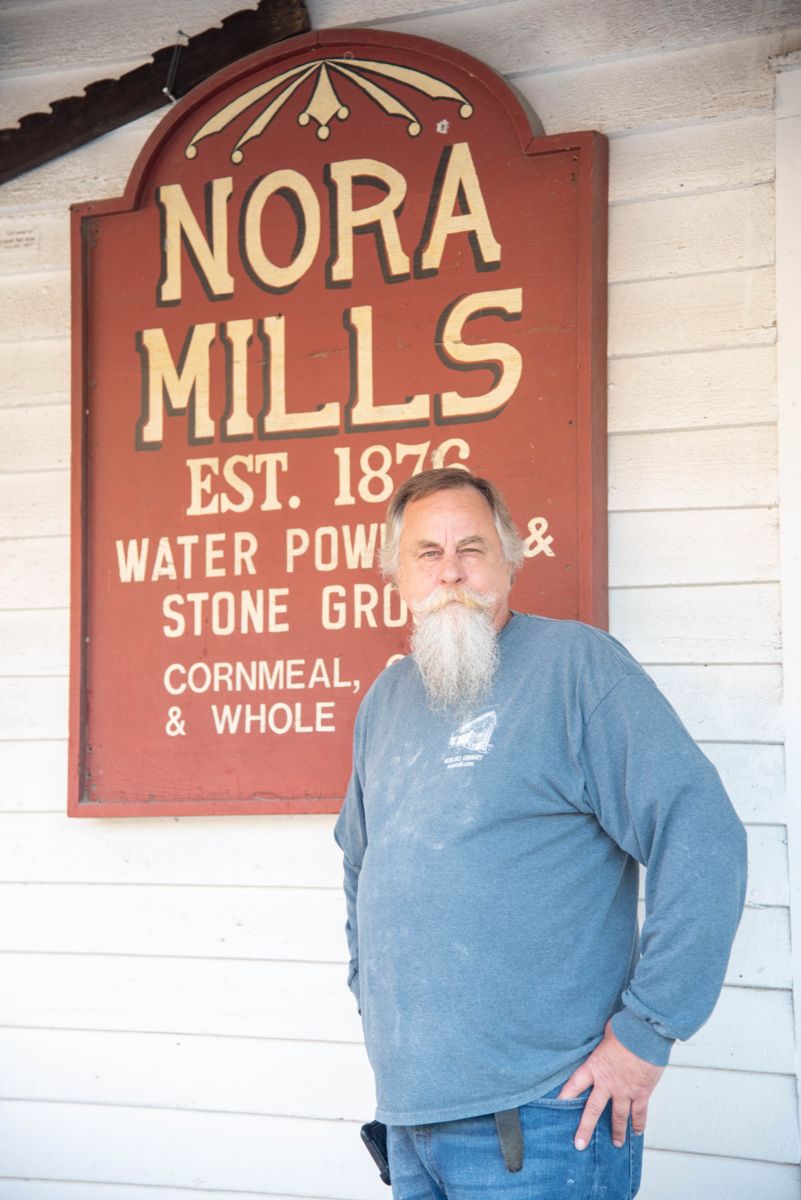 Word of Nora Mill has even spread across the globe.

“Tokyo sent a film crew here and did a film segment on us. I may be famous in Tokyo,” Martin said, noting that he’s already famous on TikTok.

Ron Fain’s youngest daughter, Joann Fain Tarpley, continues to manage and operate Nora Mill Granary alongside her husband, Rich. When the pandemic struck, Joann and Rich increased their internet presence — especially through creative TikTok marketing — and their online sales skyrocketed. Now that the granary and country store have opened back up, Martin said the business is once again welcoming school busses and group tours, along with visitors to Helen — some of which have been shopping at Nora Mill for generations.

“We are still a family-run operation, and we are so proud of our product,” he said. “We have people who are regular customers, who’ve been coming for 40 or 50 years. I get 90-year-old men walking in and saying, ‘I used to come here as a boy with my daddy.’ There’s a lot of history here.”