The convention’s “85 Years & Growing” theme highlighted how GFB has given Georgia farmers a united voice in the legislative halls of Atlanta and Washington, D.C., since it was founded in 1937. Convention events also highlighted the leadership development and ag awareness programs the organization’s 158 chapter offices and volunteer members hold statewide to prepare the next generation of ag leaders and connect with consumers. To learn more about GFB’s history visit www.gfb.ag/85yearhistory .

While delivering his annual address, McCall discussed the significant changes Georgia farmers have seen in the past 85 years.

“Our advancement in technology is mind-blowing – from the early days of steel-wheeled tractors, like my granddaddy bought new in 1934, to tractors that drive themselves using Global Positioning System Satellites. Technology has improved our lives and made us more efficient and productive.” McCall said. “It’s hard to grasp what agriculture may look like in 85 years, but I believe strongly that Georgia Farm Bureau must continue our work in making it better, just like those original farmers did for us.”

He highlighted the many ways GFB is working to ensure its and Georgia agriculture’s future while honoring the organization’s past.

"We haven’t wavered from our original founding purpose 85 years ago: to provide leadership and assistance to farmers and to ensure agriculture is a thriving industry in the future,” McCall said. “We pride ourselves in being the Voice of Georgia’s farmers. We do this in the legislative arena through our advocacy efforts and in our communities through our public relations and ag awareness programs.”

Through the years, GFB has secured legislation that protects farmers’ property and water rights and provides relief on sales and property taxes that allows farmers to keep operating.

“Farm Bureau isn’t just for farmers. Our work also benefits every consumer who eats three times a day. Our membership is open to anyone, and our members have access to an incredible variety of member benefits from travel discounts to banking and insurance products,” McCall said.  “Will you join me in regaining that same level of passion that led our founding members to ask friends and neighbors to join our organization?”

McCall presented outgoing Georgia Agriculture Commissioner Gary Black with a Georgia Farm Bureau honorary lifetime membership in recognition of the many contributions Black has made to Georgia agriculture during his 40-year career.

“We appreciate Gary’s wife, Lydia, sharing Gary all these years as he worked for Georgia farmers. We thank you, Gary, for everything you have done for Georgia agriculture and wish you the best in the next chapter of your life.”

Black began his career at Georgia Farm Bureau as its Young Farmers & Ranchers coordinator, then lead the Georgia Agribusiness Council before being elected ag commissioner in 2010.

As he took the podium, Georgia Gov. Brian Kemp acknowledged the importance of Georgia farmers saying, “Agriculture is our No. 1 industry. I know that and won’t forget it.”

“Gary Black has served our state well and we thank him,” Kemp said.

The governor reviewed legislative wins Georgia agriculture had in the 2022 General Assembly.

These included passing the Right to Farm Act, expanding the ag education program for elementary schools from a pilot program to permanent statewide status, and passing Senate Bill 396, which establishes the framework for Georgia food banks to purchase fresh produce directly from Georgia farmers, Kemp said.

“The Right to Farm Act gives Georgia’s farmers protection from being sued out of business by neighbors for normal farming practices. Expanding the ag elementary education program will ensure the next generation of Georgians will know how their food is grown,” Kemp said. “Senate Bill 396 empowers us to fully utilize the Georgia Farm to Food Bank Program. In a time when Georgians are facing record high inflation, more Georgians are facing food insecurity. Some Georgia farmers have trouble getting all their crop to market. Senate Bill 396 connects food banks directly with farmers to give more Georgians access to fresh food and vegetables.”

“I thank Rep. Terry England for securing these funds. I want to thank him for his service to Georgia as he retires. It’s never a bad thing when a farmer holds the state’s purse strings,” Kemp said. “I’d also like to thank Senator Russ Goodman for introducing this bill and Gary Black for his support in getting this passed and implemented.”

Other ag achievements Kemp referenced included the creation of the Agricultural Trust Fund to use fees farmers pay to acquire a GATE card to fund marketing and promotion of GA products and state Farmers Markets.

Kemp said he and the 2022 general assembly made significant investments in UGA Cooperative Extension and research, ag education, and soil and water conservation programs.

“My commitment in 2018 to make Georgia’s College of Agricultural and Environmental Sciences the best agriculture college in the country is something we will work on in the next four years, Kemp said.

In the last fiscal year, Georgia saw 51,132 new jobs created in the private sector, which led to $21.2 billion in investments coming into communities statewide with 85% of the communities outside of Metro Atlanta, Kemp said.

“Farming means business and here in the Peach state – the best place to do business – I want to keep it that way. I still have that chainsaw that Gerald Long gave me here at the 2018 Georgia Farm Bureau convention, and I plan on using it because we have more wood to chop.”

Black shares what he’s learned from serving in office

“I’m thankful for the 12 years you’ve allowed me to serve as your agriculture commissioner,” Black said.

With his usual dry wit, Black shared lessons he’s learned from serving in and running for public office. These lessons included: be prepared to work hard once you’re in office and take responsibility for everything that happens in the office you lead.

He said it’s important to be prepared to receive criticism both online and in person.

“Remember that your critics are people who demand grace and patience,” Black said.

Black encouraged convention attendees to realize that reporters are people, too.

“I have found in life that if you tell them [reporters] the truth and don’t avoid things amazing things can happen,” Black said.

Black’s sixth lesson was to remember that trying not to lose is the enemy of winning.

“Playing defense is the opposite of winning,” Black said. “The future will demand that we all step up.”

While his travels have taken him to state Farm Bureau conventions across the country, Duvall, a Greene County native, expressed appreciation for GFB’s efforts to promote agriculture.

“If you’re going through stress, the stigma of being embarrassed because of that is wrong.

We’ve all got stress and we all should be looking for a place to release that stress,” Duvall said. “You cannot handle these things by yourself. If you need help, ask for it. It’s nothing to be ashamed of. Don’t let us have to come and see your family because you’ve done something bad to yourself.”

“One hundred and three years in, we’re more relevant than ever,” Duvall said. “You may never know all the things we’ve accomplished, held back or slowed down.”

Duvall said that looking ahead, one of the biggest challenges is that almost half of Congress – 260 representatives and senators – is either new or has been in office less than four years and has never been part of writing a farm bill. Duvall emphasized that while AFBF can make contacts and present the organization’s stance on policy issues, the real power lies in members contacting their members of Congress and sharing how the farm bill has helped them.

“They need to know you are the geniuses, you are the experts,” he said. “You are the ones they need to hear it from. Because when you tell them that story, because when we’re engaged with Farm bureau at that level, we can make things happen.”

Georgia Agriculture Commissioner-elect Tyler Harper said agriculture has great potential and that this is an exciting time for the state’s farmers despite the challenges they face.

Harper, a seventh-generation farmer from Irwin County, touted some of agriculture’s biggest legislative victories – the Georgia Agricultural Tax Exemption, Freedom to Farm Act – and stressed that constituent engagement would be key to pushing forward to support Georgia’s farmers in other ways.

“If you don’t know your member of the general assembly, if you don’t know your legislator, your state senator or state representative, I want to encourage you to get to know them,” Harper said. “Take them out to eat. Get to know them before the session starts in January, because when your public policy staff send out that alert to you, you can pick up your phone and call your legislator and let them know the issues that you’re dealing with, because you have that one-on-one relationship.”

Harper celebrated Georgia’s establishment of elementary school agricultural education programs, noting that Georgia is the first state with ag education available from kindergarten to adulthood, a crucial effort to ensure that agricultural business can thrive and that consumers have a clear understanding on the origins of their food.

“I don’t know about you, but I don’t want some foreign entity providing food and fiber and shelter here on our own shores. I want us to be doing it here at home,” he said. “Americans enjoy the safest most abundant food supply in the world. We can continue to ensure that Georgia agriculture is successful, that American agriculture is successful, that you are successful in your entities by protecting the Georgia farmer, protecting the producer and through that lens of understanding how important and how vital it is to our economy.”

Jekyll Island Authority Executive Director Jones Hooks welcomed GFB to the island and celebrated how the organization’s history is closely connected to Jekyll, which is celebrating 75 years of operation under state ownership.

“The Jekyll Island Authority is proud of our continued association with Georgia Farm Bureau,” Hooks said. “We are committed to continued improvement of this island and to assure Jekyll is an enjoyable and attractive convention destination for all Farm Bureau delegates today and delegates yet to come. Thank you!”

Hooks also emphasized his personal connection with GFB, noting that both of his grandfathers were farmers and his paternal grandfather, V.H. Hooks, was a president of the Emanuel County chapter of United Georgia Farmers, which became Georgia Farm Bureau. Hooks said he and his wife still own a portion of his maternal grandfather’s farm in Candler County.

Hooks expressed gratitude that GFB stuck with Jekyll Island as its convention facilities were updated from 2010 through 2011, including holding the event in a series of what he called temporary pavilions.

“Some of you will remember meeting in tents within the historic district during this time --- when we first mentioned tents, several of your members thought we were talking about a circus tent,” Hooks said. “I am thankful to Farm Bureau that during the years when we had demolished the old convention center and this new center was under construction, you stuck with Jekyll Island!”

GFB was one of the first organizations to hold a meeting in the new convention center after it was completed in 2012.

Founded in 1937, the Georgia Farm Bureau Federation is the state’s largest general farm organization with 158-chapter offices that cover all of Georgia’s 159 counties. As a membership-driven, nongovernmental organization, GFB serves as the voice of Georgia farmers and rural Georgia by advocating for them on legislative issues and promoting Georgia commodities. Its volunteer members actively participate in activities that promote agriculture awareness.

GFB membership is open to the public and offers a wide variety of benefits, including insurance and discounts for health services, travel and family entertainment. Enrollment in any of the member benefits is optional and not a requirement for membership. For more information about agriculture please visit www.gfb.org, like Georgia Farm Bureau on Facebook or follow GFB on Twitter. 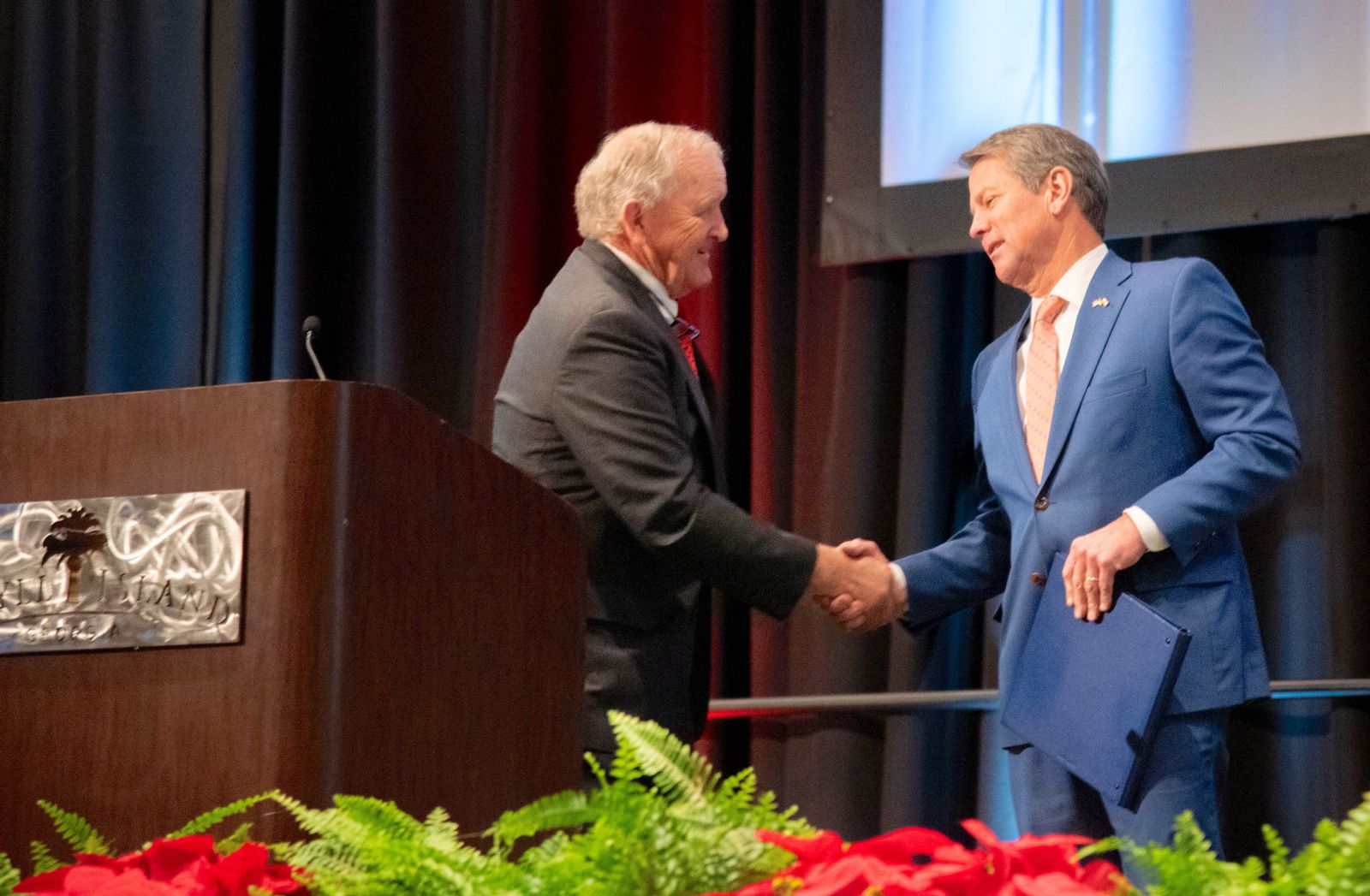