GFB President Tom McCall begins the second year of the two-year term GFB voting delegates elected him to last December. McCall and his family grow a variety of grain crops, sweet corn, hay and straw along with beef cattle, hogs and sheep on their farm in Fortsonia in Elbert County. He and his wife, Jane, have two adult children: Al (wife Rachel) and Katie M. Archer (husband Bristol) and two grandsons.

McCall has been a Farm Bureau member since 1978. His first leadership role with Farm Bureau was serving as the chairman of the Elbert County Farm Bureau (ECFB)Young Farmers & Ranchers (YF&R) Committee. He represented GFB’s 2nd District on the GFB YF&R Committee in 1981-82 and chaired the state committee in 1982. McCall represented GFB’s 2nd District on the GFB Board of Directors from 1984-1996.  He also served as ECFB president for a number of years.

McCall served in the Georgia House of Representatives for 26 years from Jan. 9, 1995, when he was sworn into office, until he retired from the legislature at the end of his 2020 term. As a state representative, McCall represented Georgia’s House Dist. 33, which at the time included Elbert and Lincoln counties and portions of Madison, Wilkes and Columbia counties. McCall chaired the Georgia House Agriculture & Consumer Affairs Committee from January 2005-2020.

GFB voting delegates redesignated Daniel Johnson of Pierce County as the organization’s 1st vice president. Johnson also represents GFB’s South Georgia Region, which includes 53 counties in the lower third of the state running from the Georgia coast to the Alabama line. Johnson is beginning the third year of his second term as GFB South Georgia vice president. Johnson, who grows tobacco, corn, cotton and peanuts, previously represented the organization’s 10th District on the GFB Board of Directors from 2006-2016. He is vice president of Pierce County Farm Bureau and previously served as PCFB president for 25 years. Johnson chairs the Georgia Agricultural Commodity Commission for Tobacco. He and his wife, Patricia, have four children and three grandchildren.

Caldwell and his wife, Kim, farm with his father, Gwen, and their son, Colton, and his wife Delayna, raising poultry and cattle while growing corn and soybeans. Caldwell has served as a Heard County Farm Bureau director since 1990 and as the HCFB president since 2013. He served on the GFB Young Farmers & Ranchers Committee from 1992-1994. He is a supervisor for the West Georgia Soil Conservation District and serves on U.S. Rep. Drew Ferguson’s Agriculture Advisory Committee.

Bernard Sims of Catoosa County continues to serve as the GFB North Georgia vice president. Sims begins the second year of his fifth three-year term. The GFB North Georgia Region includes 49 county Farm Bureaus in the northern third of Georgia. Sims serves as the Catoosa County Farm Bureau president, a position he has held since 1979. Sims and his wife, Janet, grow turf grass, small grains and hay. The family also raises cattle and strawberries sold to the public through a you-pick patch.

GFB members in the organization’s 2nd District elected Gilbert Barrett of Habersham County to a two-year term on the GFB Board of Directors to represent their 14 counties in Northeast Georgia. Barrett and his family raise beef cattle and breeder poultry, which are the grandparents of the broiler chickens other Georgia farmers raise for consumers. He also grows hay used primarily on his farm. Barrett has been an active Farm Bureau member since the early 1990s, when he chaired the Habersham County Farm Bureau (HCFB) YF&R Committee, then served two years on the GFB YF&R Committee in 1993-1994. He has served as an HCFB director since the late 1990s, holding numerous offices through the years, including six years as president, several years as vice president and secretary. In addition to currently serving as an HCFB director, Barrett also chairs the HCFB Promotion & Education Committee. He and his wife, Donna, have three adult children: Johnathan, Will and Allison. 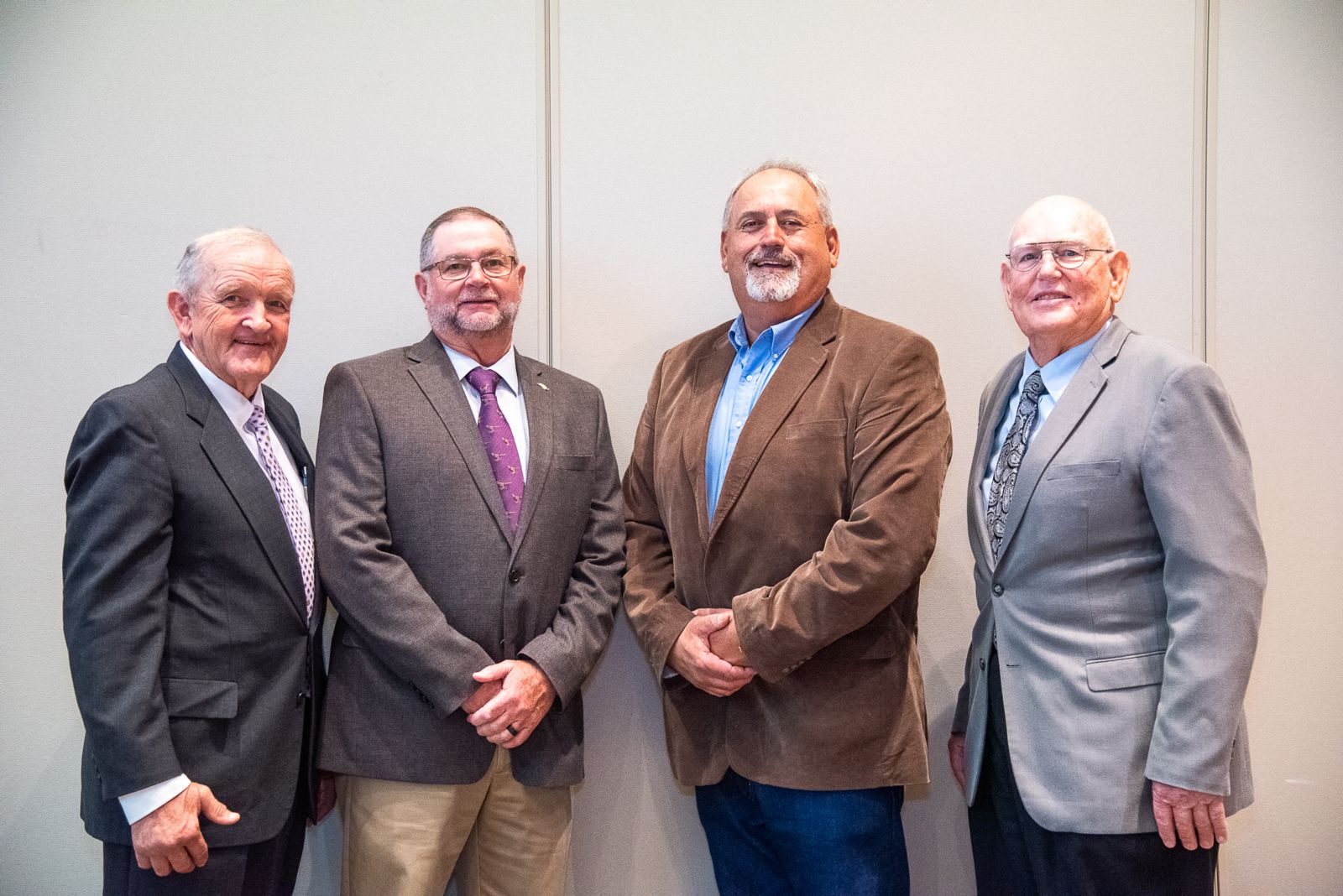 GFB members in the organization’s 3rd District elected Brad Marks of Newton County to a two-year term on the GFB Board of Directors to represent the district’s 14 counties in the Metro Atlanta area. Marks and his wife, Terri, have three adult sons: B.J. (Kaci), Cody (Kristin), and Orry (Brandi). Marks and B.J. farm together, raising cattle and operating a custom hay and baleage business. Their cattle operation includes a commercial cow-calf herd and purebred registered cattle raised for livestock shows.

Marks has been an active Farm Bureau member since 1981. He served on the Newton County Farm Bureau (NCFB) Board of Directors for several years in the 1980s as chairman of the county Young Farmer & Ranchers Committee. He served on the GFB YF&R Committee in 1991 and 1992, chairing the state committee in 1992. He was NCFB president from 1993 to 2000. He remained an active Farm Bureau member through the years and rejoined the NCFB Board about five years ago. He currently chairs the NCFB Legislative Committee.

GFB members in the organization’s 4th District elected Russ Wilburn of Barrow County to a two-year term on the GFB Board of Directors to represent the 17-county district in Georgia’s eastern Piedmont region. Wilburn replaces Marvin Ruark, of Morgan County, who retired from the board after serving 48 years.

Wilburn and his wife, Laura, raise beef cattle and hay. Russ also owns Russ Wilburn Landscapes, Inc., which offers landscaping services in the Winder and Athens area. Wilburn has been an active Farm Bureau member since 2004. The Wilburns served on the GFB YF&R Committee in 2016-2017 and were the committee vice chairs the second year. Russ has served on the Barrow County Farm Service Agency Committee for the past three years and is a member of the Georgia Cattlemen’s Association. The Wilburns have three children: Lawson, Margaret and Henry.

Delegates also voted on policy that will direct the organization’s stance on legislative issues pertaining to agriculture in the coming year.