Funds for the $22,924 donation were raised through Farm Bureau’s Harvest for All campaign, which included donations from county Farm Bureaus, the organization’s state office, and the GFB Young Farmers & Ranchers Committee’s “Calf’s Weight in Change” drive earlier this year.

“While we are blessed to have an abundance of food in America, too many among us still struggle to acquire enough food to sustain good health,” said Georgia Farm Bureau President Gerald Long. “We are happy to continue supporting the Georgia Food Bank Association and its programs through our Harvest for All donation.”

According to the Georgia Food Bank Association, food banks on average can provide four meals for every dollar they receive, meaning GFB’s donation will provide almost 100,000 meals.

The  USDA’s Economic Research Service (ERS), in its report, “Household Food Insecurity in the United States in 2018,” shows an average of 11.3 percent of Georgia households (approximately 1.1 million people) experienced food insecurity over the three-year period from 2016 to 2018, meaning that during that time those households experienced periods where their diets were reduced in quality, variety or desirability, or they had disrupted eating patterns or reduced food intake. ERS reported food insecurity in 11.1 percent (14.3 million) of households nationwide in 2018. Food insecurity has been linked to a variety of chronic health issues. The full report is available here.

In addition to helping with purchases of high-protein foods like chicken and peanut butter, donated money helps the GFBA offset costs associated with collecting and distributing food donations.

“We are grateful to the Young Farmers and Ranchers for their leadership in Georgia,” Craft said. “Harvest for All provides critical resources to the regional food banks, with the added benefit of making more farmers aware that they can donate to food banks in several ways. Georgia farmers generously donated more than 16 million pounds of fresh, nourishing produce to our network this year through the Farm to Food Bank Program."

The GFBA started its Farm to Foodbank program in 2014, through which it accepts food donations directly from farmers, who give nutritious fresh fruits and vegetables that grocery chains won’t buy for aesthetic reasons. Donations of food by Georgia’s farmers provide millions of meals each year. The GFBA attributes the success of the Farm to Foodbank program to its affiliation with Georgia Farm Bureau.

Georgia Farm Bureau’s Harvest for All donation will have a statewide impact. The Georgia Food Bank Association distributes the funds to America’s Second Harvest of Coastal Georgia in Savannah, the Atlanta Community Food Bank, the Chattanooga Area Food Bank (Food Bank of Northwest Georgia), Feeding the Valley in Columbus, the Food Bank of Northeast Georgia in Athens, Golden Harvest in Augusta, the Middle Georgia Community Food Bank in Macon and Second Harvest of South Georgia in Valdosta. To see which counties each food bank serves, click here.

Since 2004, GFB has coordinated annual Harvest for All campaigns through which GFB members across the state have donated about 49,000 pounds of staple food items and more than $220,000 in cash donations distributed to the food banks located throughout Georgia affiliated with Feeding America.

About the Georgia Food Bank Association

Created in 1985, the Georgia Food Bank Association (GFBA) is a membership association composed of seven regional food banks in Georgia that collectively distribute more than 130 million pounds of food annually to over 2,000 partner nonprofits with food assistance programs throughout the state. The GFBA food banks share food, resources and best practices to help close the meal gap and ensure a hunger-free Georgia.

The GFBA was created in a statewide effort to support the food security of low-income and needy individuals, families and households, through their efforts and in support of their member food banks. Its role is to maximize the impact of member food banks. The food banksare members of Feeding America, the national network of more than 200 food banks.

Founded in 1937, the Georgia Farm Bureau Federation is the state’s largest general farm organization with 158 county chapters. As a membership-driven, nongovernmental organization, GFB serves as the voice of Georgia farmers and rural Georgia by advocating for them on legislative issues and promoting Georgia commodities. Its volunteer members also actively participate in activities that promote agriculture awareness.

GFB membership is open to the public and offers a wide variety of benefits, including insurance and discounts for health services, travel and family entertainment. Enrollment in any of the member benefits is optional and not a requirement for membership. If you would like more information about agriculture please visit www.gfb.org, like Georgia Farm Bureau on Facebook @GeorgiaFarmBureau or follow on Twitter @GaFarmBureau. 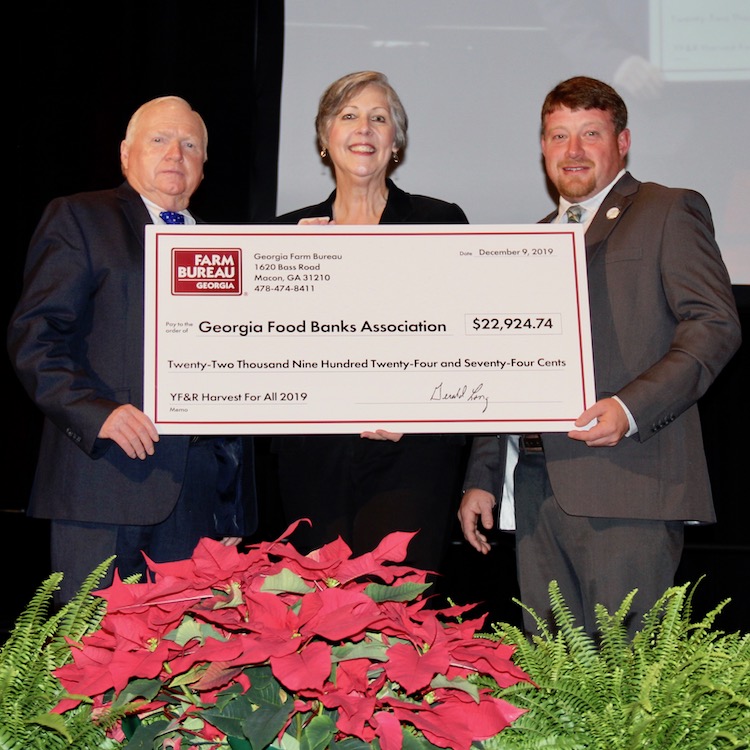