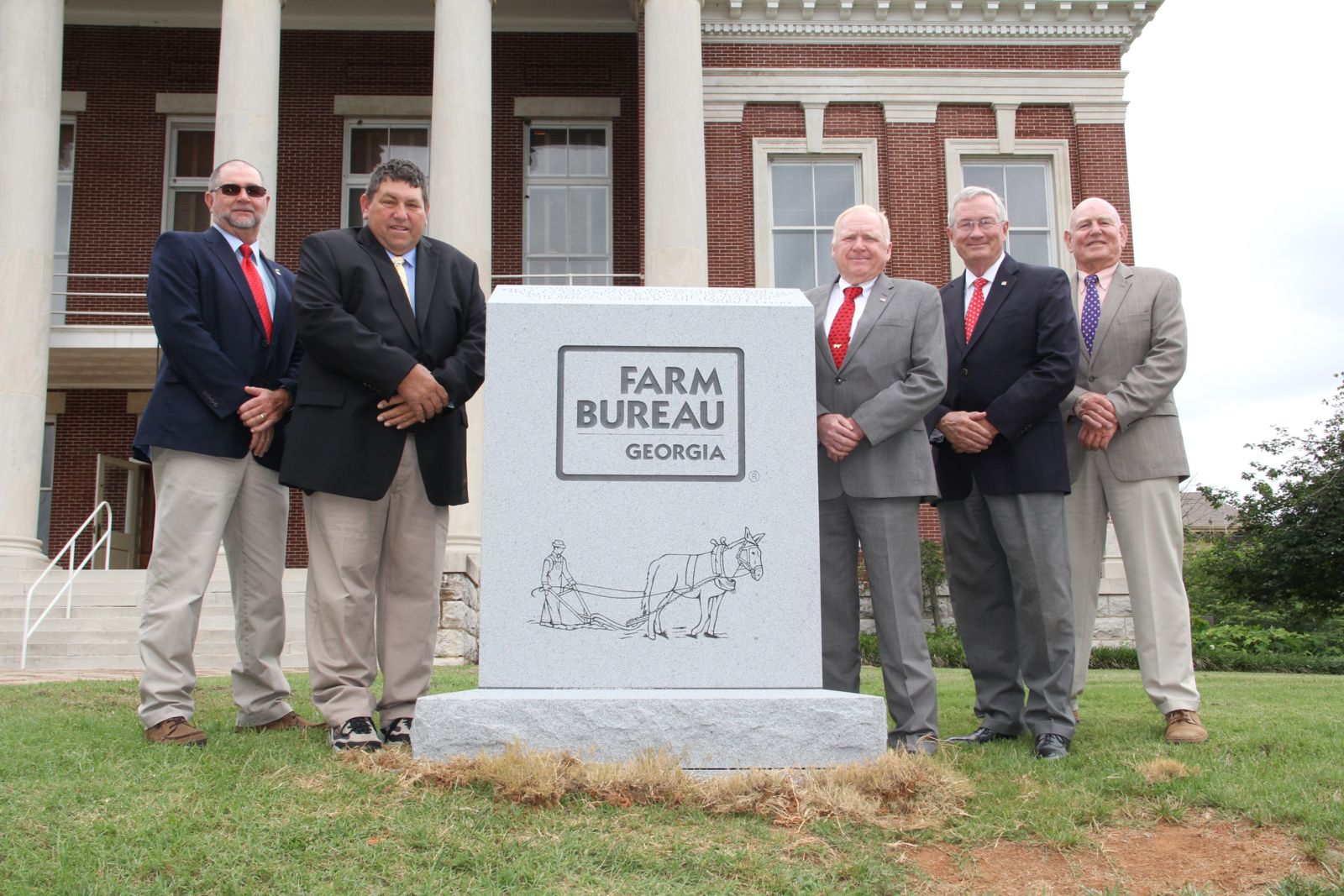 CARTERSVILLE, Ga. - Bartow County is on the northern edge of the Atlanta Metropolitan Statistical Area, now one of the 10 largest metro areas in the United States. But in 1937, it was a farming community like just about everywhere else in Georgia, and it served as the jumping-off point for what became Georgia Farm Bureau (GFB), the state’s largest general farm organization.

“I think our organization has stood the test of time,” said GFB President Gerald Long. “Through the years we’ve never strayed from our original mission – to serve as the voice of Georgia farmers. Not only have our farmer members benefitted from the work we’ve done to represent them, but so have consumers, who have access to healthy locally grown food, cotton for clothes and timber that provides wood for houses, clean air and wildlife habitat.”

On June 17, 2017, a monument was placed on the grounds of the Bartow County courthouse to commemorate the initial meeting and on June 21, GFB marked its 80th anniversary with a reception and ceremony at the Clarence Brown Conference Center in Cartersville. The event drew approximately 150 people, many of them Farm Bureau members, who heard remarks from UGA College of Agricultural & Environmental Sciences Dean Sam Pardue and Georgia Commissioner of Agriculture Gary Black.

“We have had a great partnership with Georgia Farm Bureau,” said Pardue, who was invited as an acknowledgement of GFB’s long-standing relationship with the UGA Cooperative Extension Service. “When those folks gathered and created this organization, I suspect they never thought it would be what it has become today. What we should strive for for our legacy is 80 years from now, people will look back and reflect on the things we did in this generation to position this organization to be successful.”

Robert M. Stiles, a World War I veteran and farmer who lived in southwest Bartow County, met with farmers from Cherokee, Cobb, Gordon, Floyd, Polk and Paulding counties on June 17, 1937, at the Bartow County courthouse. They resolved to form the United Georgia Farmers, the forerunner of what is now Georgia Farm Bureau.

Six weeks later, on July 31, 1937, a group of 50 farmers from 25 Georgia counties met at the Ansley Hotel in Atlanta and officially formed the United Georgia Farmers, which aimed to be involved in county, state and national affairs in the pursuit of equal opportunity for farmers and raising their standard of living.

Stiles was selected as the organization’s first president, heading a slate of officers that included W.D. McClure of Acworth, T.R. Breedlove of Monroe, T.B. Thornton of Hartwell and J.F. Alexander of Louisville.

Black, whose first job after college was with GFB, encouraged the organization’s members to cherish their inherited legacy while continuing to build on it.

“We can have good memories, but we have to pay that forward and we have to remind ourselves what the future holds,” Black said. “We’ve got to pledge to ourselves today and remind each other that our work is not done.”

United Georgia Farmers became affiliated with the American Farm Bureau Federation in 1939, and in 1941 adopted Georgia Farm Bureau as its name. From the original 50 farmers, GFB has grown to a statewide membership of more than 300,000 families.

Georgia Farm Bureau’s volunteer members actively participate in local, district and state activities that promote agriculture awareness to their non-farming neighbors. GFB also has 20 commodity advisory committees that give the organization input on issues pertinent to the major commodities grown in Georgia.