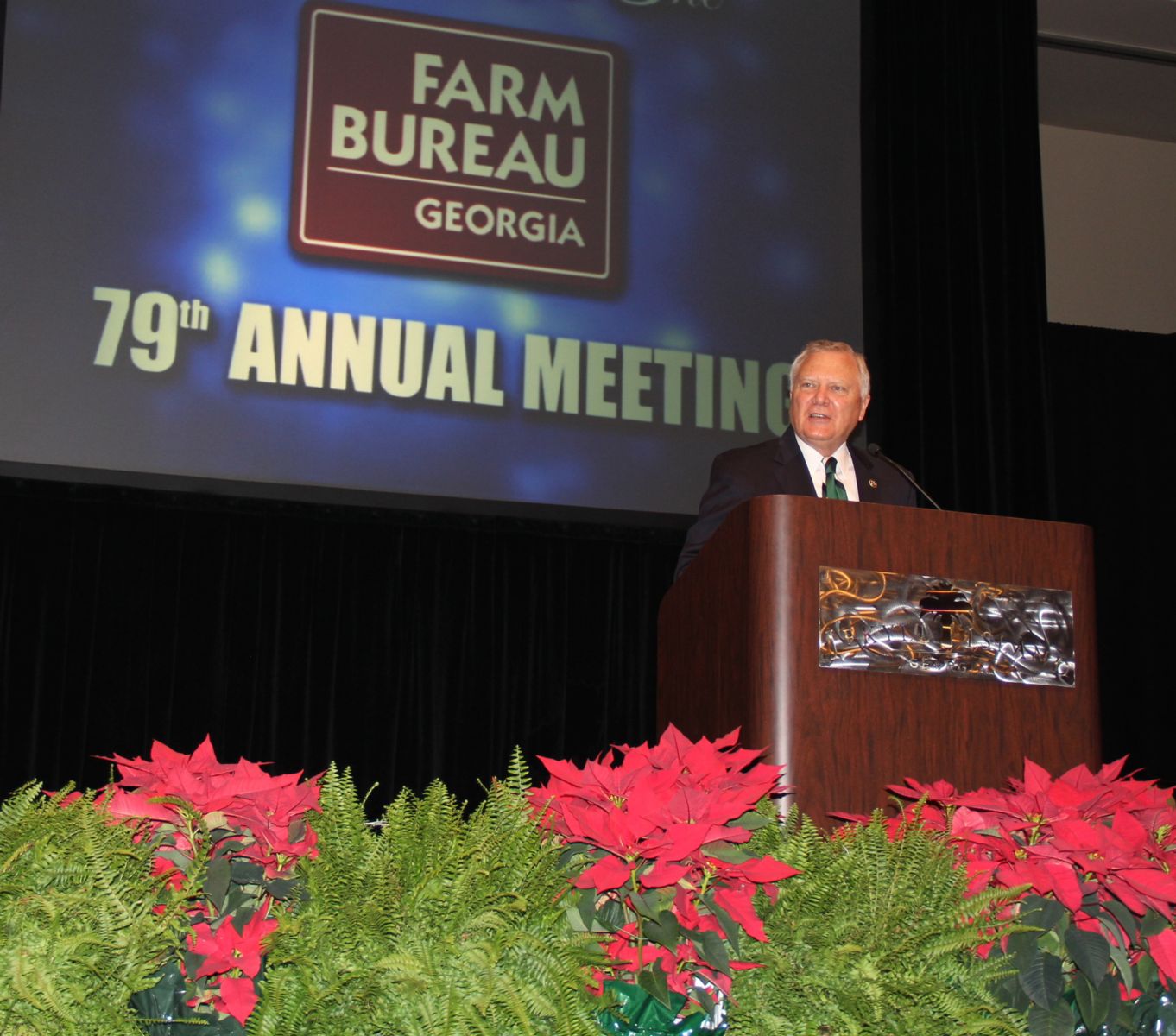 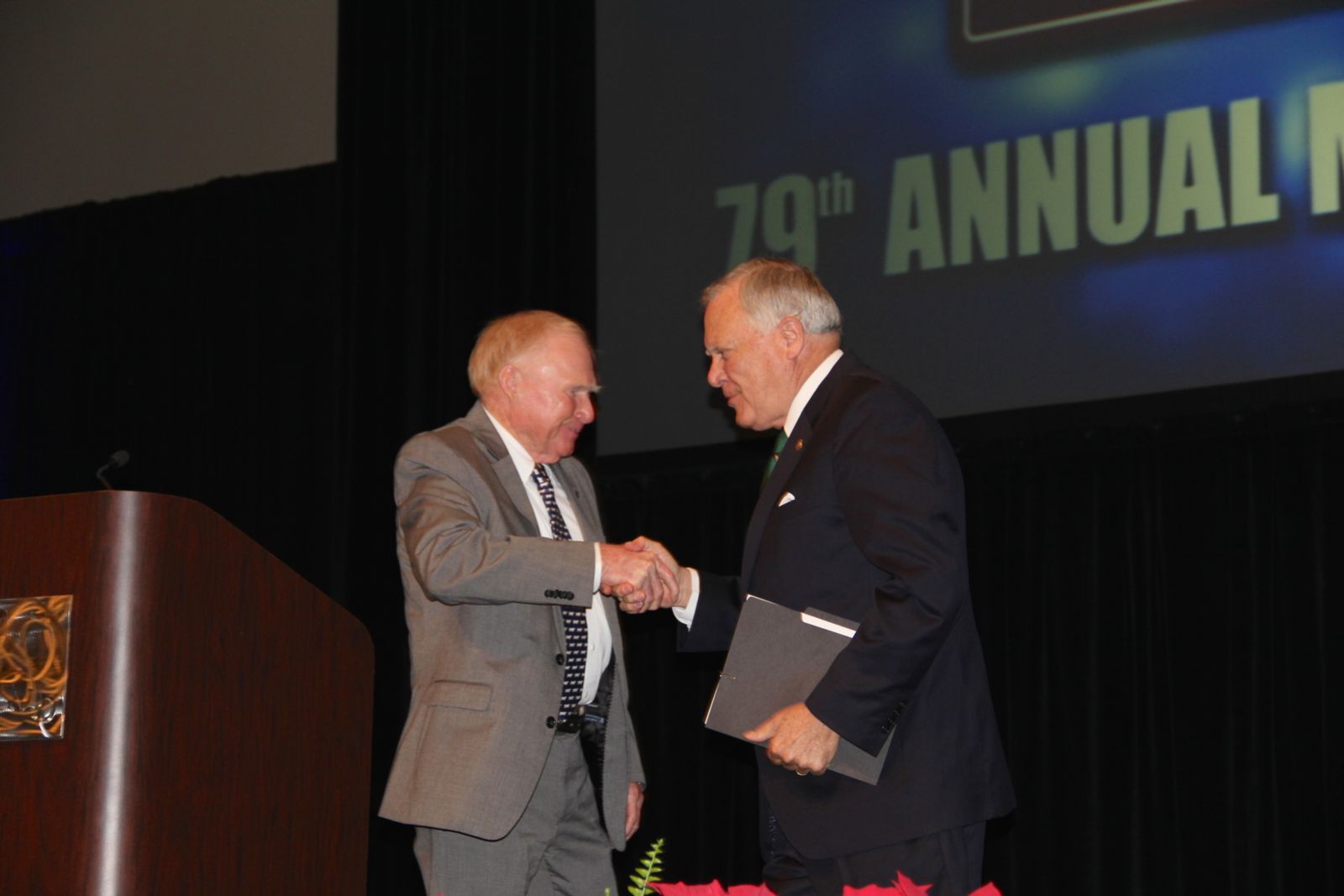 Long reviewed his first 11 months in office, during which he has visited with Farm Bureau leaders all around the state.

“I have learned a lot, and I want to thank all of you for that.  You have welcomed me to your farms and into your homes. You have invited me to meetings in your counties and districts, and it has been more help to me than you can imagine,” Long said.  “Georgia is a very diverse state, and visiting with you has given me valuable insight as we work together to promote agriculture.”

As always, weather events have created serious issues for the state’s farmers, Long said, from the ongoing drought to the damage caused by Hurricane Matthew. Persistent low commodity prices have also presented challenges, as have federal regulations.

Long told attendees about GFB’s friend of the court brief filed in the Supreme Court case Florida has brought against Georgia. The trial phase of the case has concluded and he court-appointed special master could make his recommendation to the court by the end of the year.

“No matter what decision the court finally hands down, the verdict will directly impact farmers’ ability to use water in this state.  This court decision is not just some legal exercise orconcept. This decision will affect you and me - our farms, our land, our crops, our livelihoods,” Long said.

The struggles with commodity prices carry particular significance as Congress begins deliberations on the next farm bill. Long said it is important for farmers to present a united front while voicing support for federal farm programs.

“Some of the voices in this debate are seeking to completely change American agriculture policy. They interpret the productivity gains in American agriculture as being counterproductive or even destructive,” Long said. “We must be ready to defend American farmers in the farm bill debate not only because it is our mission, but also because our nation depends on sound farm policy. Georgia Farm Bureau believes American food security is a national security issue, and we will engage on this debate with that as our vision.  We will continue to work with American Farm Bureau and other organizations to move forward with a farm bill that strengthens the food security of the United States.”

“I joined Decatur County Farm Bureau because I wanted to have a voice in agriculture, and Farm Bureau is the best place to do it,” Long said.  “That is why all of you are here. The reason we give our time and talents is because Farm Bureau is the vehicle for us to amplify our collective voice – to be the voice of Georgia Farmers.”

Deal told GFB members about the state’s efforts to mitigate ongoing drought and how agriculture fits into the state’s water management plans, and how decisions on water conservation have been driven by the Supreme Court case.

Florida has long contended that too much water is taken from the Chattahoochee to meet the demands of the Atlanta area and has pushed the argument that farmers in Southwest Georgia have been withdrawing too much water for irrigation.

“I assure you that Georgia has worked on your behalf and on behalf of all Georgians to take proactive steps to protect your interests and those of your fellow citizens,” Deal said. “You have a right to know the things that impact your work and your livelihood. I assure you I will not and I have not turned my back on the largest industry in the state of Georgia.” Deal said that numerous attempts have been made to reach a water-sharing agreement with the state of Florida, without success.

Despite growing by more than 1 million people over the past decade, metro Atlanta is withdrawing less water, Deal said, noting that per capita consumption has decreased by about 30 percent over the same period of time.

Deal discussed his decision in 2015 to move responsibilities of the Georgia Soil & Water Conservation Commission to the Environmental Protection Division (EPD). He explained that the EPD is the only state agency with enforcement authority that would be recognized in the courts. He took criticism over this decision, but said the move was made to protect farmers’ interests, in hopes that the special master will take the state’s proactive steps to conserve water into consideration.

“I believe it is better for the state to regulate its own issues than to wait for the Supreme Court to tell us what to do,” Deal said. “That’s why I refuse to sacrifice agricultural interests in this war. I will not turn my back on you, nor will I ignore our state’s economic interests in this fight.” 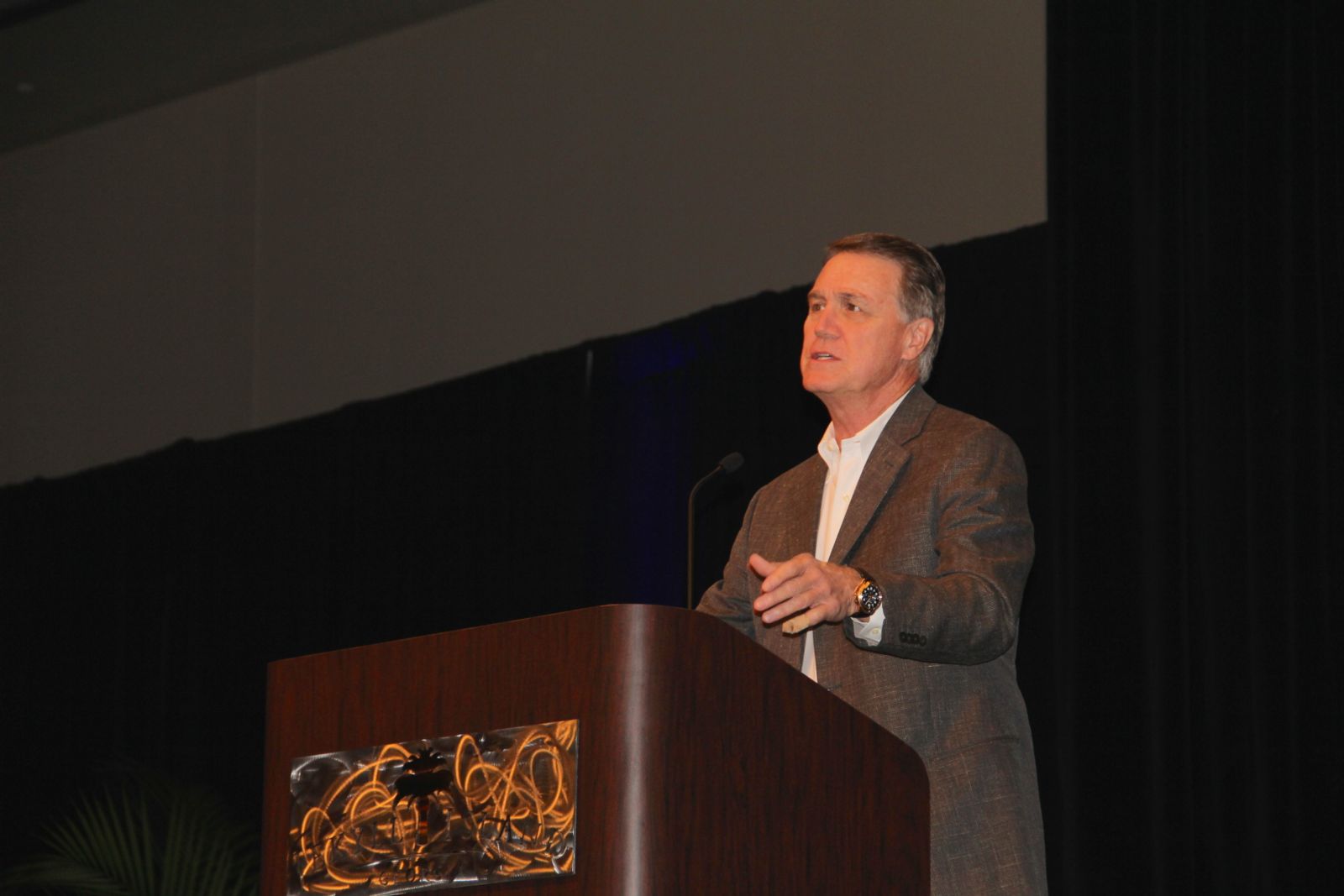 Sen. Perdue reaffirmed his commitment to Georgia agriculture and expressed optimism about Congress’ ability to work with the incoming Trump Administration to repeal regulations like Waters of the U.S., repeal the Affordable Care Act (commonly referred to as Obamacare) and pass authorization of the Keystone Pipeline to help meet the nation’s energy needs.

This regulatory environment is sucking the very life out of our free enterprise society,” Perdue said, noting that the U.S. economy has grown at a rate of six tenths of one percent over the past eight years despite low interest rates and inexpensive fuel costs. “You on the farm feel it more readily and more directly than most people.”

Black focused his remarks on seven things county Farm Bureaus can do well to achieve excellence. They included finding something to stop doing, protecting the Georgia Agricultural Tax Exemption (GATE), adopt the GDA’s 20/20 Vision program, taking conversations about food and agriculture from “sustainable” to “stewardship-able,” embracing technology and social media to connect with consumers, investing time, efforts and resources into improving communities, and praying for the U.S.

“I believe if we were to embrace these seven principles we all can bat .400. To do that would be special for our industry,” Black said.

Finding something to stop doing, Black said, refers to eliminating activities or programs that are ineffective. Protecting GATE means ensuring that the exemption from sales taxes on ag production-related goods and fuel is not abused. The 20/20 vision is the GDA’s goal to have 20 percent of all school cafeteria meals in Georgia consist of Georgia-grown foods.

While the conversation about agriculture very often focuses on sustainability, Black said farmers go beyond sustainability in being good stewards of the land.

UGA College of Agricultural & Environmental Sciences (CAES) Dean Sam Pardue talked about living in an age of uncertainty, pointing out that there is uncertainty in agribusiness due to a number of factors, including population growth and fluctuating retail food prices, as well as uncertainty at CAES.

Pardue introduced himself and wondered whether students interested in agriculture would be admitted to UGA.

“Our college is committed to providing multiple pathways for those students,” Pardue said.

While the college adjusts to his leadership, he’ll be tasked with finding a replacement for Associate Dean for Research Robert Shulstad, who Pardue said is stepping down.

Pardue also discussed the issue of agricultural access to water, noting that agriculture’s need for water makes it important for agriculture to find ways to expand the water supply, increase current water use efficiency and improve water quality and treatment facilities.

U.S. Rep. Buddy Carter welcomed the GFB crowd to Georgia's 1st Congressional District and noted that the House has passed bills to fund medical research, a defense spending bill and within the week will vote on a continuing resolution for the federal budget.

Founded in 1937, Georgia Farm Bureau is the state’s largest general farm organization and has 158 county offices. Its volunteer members actively participate in local, state and national activities that promote agriculture awareness to their non-farming neighbors. GFB offers its members a wide variety of benefits, including insurance, but enrollment in any of the member benefits is optional and not a requirement for membership.