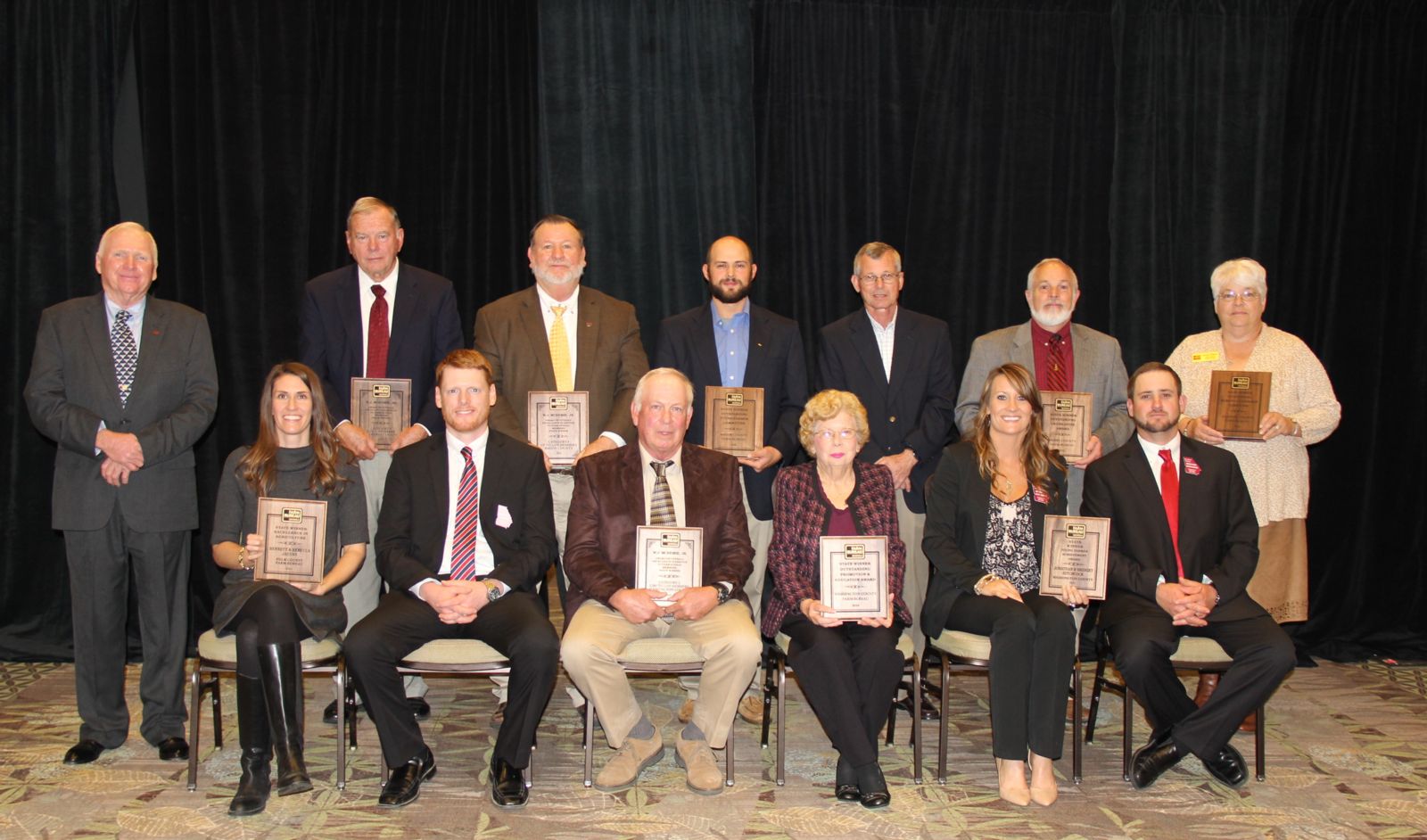 MACON, Ga. - The Georgia Farm Bureau Federation recognized the best of the organization’s volunteers and county chapters during its 79th annual convention on Jekyll Island. The state award winners were honored for the programs they conducted this past year to promote agriculture.

“Each year we recognize the individual and collective achievements of our county Farm Bureaus during our annual awards program. It is the efforts of our volunteer members who visit their local schools to teach students about agriculture through our Ag in the Classroom program or host farm tours for local community leaders and elected officials to create a greater awareness of farming in their county that help support our organization’s status as the voice of Georgia farmers, ” GFB President Gerald Long said. “I congratulate all of our individual winners, volunteer leaders and county staff who received state awards and want to thank all of our county leaders, volunteers and staff who conducted ag awareness activities in their communities this year.”

Jeanne Taylor, Bacon County Farm Bureau (BCFB) office manager, received the organization’s Outstanding Office Manager Award. Taylor, who has been employed with BCFB since 1962, was recognized for her 54-year career of working to promote agriculture and Farm Bureau in her local community.

Taylor was first introduced to farm life when she married her late husband, Jerry, in 1958. They worked on his family’s dairy farm for several years. Jerry was hired by BCFB as an insurance agent in 1961, and Jeanne joined him as secretary the following year.

“After 54 years of service, you would expect her to slow down, but instead she seems to have more energy now and initiates many new projects in our community and in our school system,” BCFB President David Lee wrote in Taylor’s application. “She is always promoting agriculture and has a passion for getting our story told to the children in our county.”

Marla Garnto, an elementary teacher in Houston County, received GFB’s Georgia Agriculture in the Classroom 2016 Teacher of the Year Award. Garnto, who teaches kindergarten through fifth-grade students at Northside Elementary School in Warner Robins, was recognized for incorporating information about agriculture into her Science, Technology, Engineering and Mathematics (STEM) curriculum to teach her students how agriculture impacts their daily lives. She received a $500 award and an expense-paid trip to the National Ag in the Classroom Conference in Kansas City, Missouri, in June 2017.

A.J. Bacon of Laurens County won the 2016 GFB Quality Hay Contest, which was open to any Georgia Farm Bureau member who produces Bermudagrass hay. Hay entered in the contest was tested at the University of Georgia Testing Lab using the Relative Forage Quality (RFQ) Test, which predicts fiber digestibility and likely animal intake of the hay. Bacon’s winning Coastal Bermuda hay had an RFQ of 164.25.  He won the free use of a Vermeer 504N baler for one year courtesy of the Vermeer Manufacturing Company with the option to purchase the mower at a reduced price at the end of the year.

Jonathan and Bridget Hitchcock of Washington County were recognized as the GFB Young Farmer Achievement winners. The Hitchcocks were one of three finalist families for the award, which recognizes young farmers who earn the majority of their income from production agriculture. The Hitchcocks farm with Jonathan’s brother James, sister Jennifer and father Waylon, growing corn, cotton, peanuts, soybeans, wheat and canola on a total of 2,400 acres, as well as raising a small herd of beef cattle.  They also have an on-farm special events venue and sell vegetables from the farm.

As the state winner, the Hitchcocks received a Polaris RTV 570 Crew Cab Ranger sponsored by Southern Farm Bureau Life, a $500 cash prize from AgSouth Farm Credit and an expense-paid trip to the American Farm Bureau Convention in Phoenix, Arizona, Jan. 6-11, 2017, to compete for national honors.

The finalists in the GFB Young Farmer Achievement Contest were Brian and Melissa Ogletree of Spalding County and Thomas and Alicia Harrell of Madison County. The Ogletrees partner with Brian’s father Bobby in Ogletree Seed, growing wheat, soybeans, browntop millet, clover, sericea lespedeza and winter peas along with maintaining a small herd of SimmAngus cattle on a total of 2,000 acres. The Harrells, who operate Over Jordan Farm, are first-generation farmers who raise poultry broilers, have a small herd of cattle and grow hay on a total of 216 acres. The two finalist couples each received a $500 cash award from AgSouth Farm Credit.
Skye Gess of Hancock County was recognized as the GFB Young Farmer Discussion Meet winner and will enjoy an expense-paid trip to the AFBF Convention in Phoenix to compete for national honors, courtesy of GFB. The three finalists were Newt Gilman of Jackson County, Caroline Lewallen of Hall County and Rachel Patrick Kinsaul, who competed for Walton County but now lives in Morgan County. Gess received a $500 cash award, courtesy of Georgia Farm Bureau, and a Polaris all-terrain-vehicle (ATV) courtesy of Southern Farm Bureau Life Insurance. The three finalists each received a $350 cash award from SunTrust Bank.

Bennett and Rebecca Jacobs of Polk County won the Young Farmer Excellence in Agriculture Award. GFB presents this award to recognize young farmers who earn the majority of their income from something other than production agriculture. Bennett teaches agriculture at Carroll County College and Career Academy. The Jacobses maintain a small herd of beef cattle and pastured hogs. The Jacobses won a Polaris 4x4 ATV courtesy of Southern Farm Bureau Life Insurance, and an expense-paid trip to the AFBF Convention in Phoenix to compete for national honors, courtesy of GFB.

The other finalists for the Excellence in Agriculture Award were Matthew and Kimberly London of White County and Troy Windham of Laurens County. Matthew farms with his father, Stanley, and grandfather, Verner, raising Holstein replacement heifers and growing a variety of forages for the 1,800-head herd on about 800 acres. Kimberly works at Northeast Georgia Medical Center. Windham works as constituent services director for U.S. Rep. Rick Allen and is a wholesale grower and plant broker, operating a 50,000-square-foot greenhouse with his father, Larry, in which he grows seasonal flowers, foliage, ferns, perennials and annuals. The finalists each received a $500 cash award courtesy of Georgia Farm Bureau.

Founded in 1937, the Georgia Farm Bureau Federation is the state’s largest general farm organization. The organization has 158 county chapters. Its volunteer members actively participate in local, district and state activities that promote agriculture awareness to their non-farming neighbors. GFB also has 20 commodity advisory committees that give the organization input on issues pertinent to the major commodities grown in Georgia.