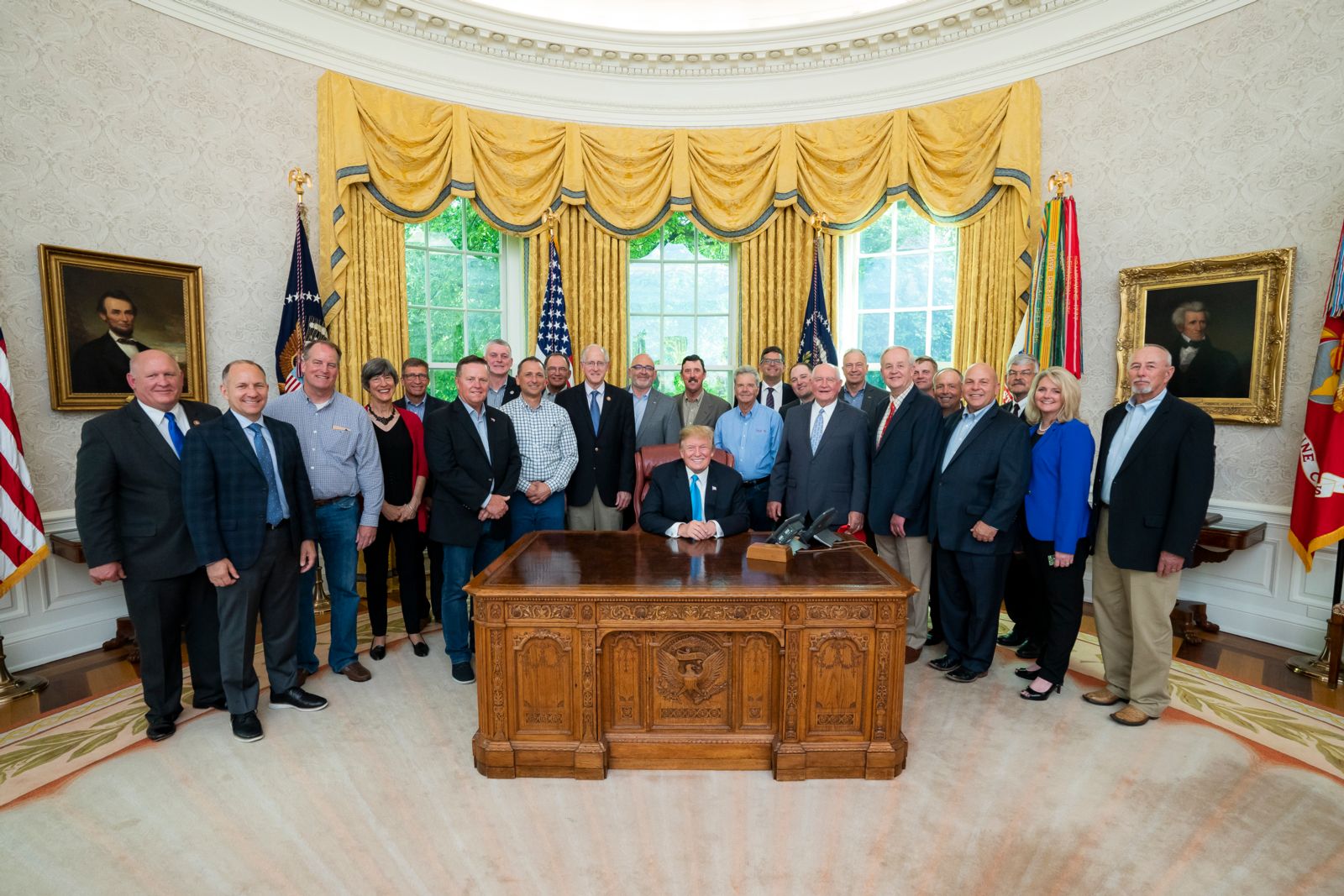 Three Georgia sons were among the group of U.S. farmers standing in the Roosevelt Room of the White House on May 23 when President Trump held a press conference to announce he was authorizing the USDA to administer up to $16 billion to offset the economic loss farmers are experiencing due to the ongoing trade war with China and other countries. U.S. Secretary of Agriculture Sonny Perdue, American Farm Bureau President Zippy Duvall and Georgia Peanut Commission Director Donald Chase were among a group of 24 representing the commodities being impacted by the trade war.

Later that day, Secretary Perdue held a conference call with reporters to discuss the three existing USDA programs the agency will use to administer the mitigation payments.

“The plan we are announcing today ensures farmers do not bear the brunt of unfair retaliatory tariffs imposed by China and other trading partners. Our team at USDA reflected on what worked well and gathered feedback on last year’s program to make this one even stronger and more effective for farmers,” said Secretary Perdue.

Recognizing that the trade war has decreased U.S. ag exports to China, the USDA announced it will provide $14.5 billion in direct payments to producers of multiple crops through the Market Facilitation Program (MFP) for 2019 administered by the Farm Service Agency (FSA). Payments will be made in up to three installments with the second and third installments dependent on future market conditions and trade opportunities. The first payment will begin in late July/early August after FSA crop reporting is completed on July 15. If conditions warrant, the second payment will be made in November and the third payment in early January.

Since the May 23 announcement, the USDA has emphasized that the MFP is being designed to avoid skewing planting decisions. The USDA has stressed that farmers should continue to make their planting and production decisions with the current market signals in mind rather than an expectation of what the MFP payment rate might be.

Producers of tree nuts, fresh sweet cherries, cranberries and fresh grapes will receive a payment based on 2019 acres of production.

In addition to using the MFP to help farmers, the USDA will allocate $1.4 billion to the Food Purchase & Distribution Program to buy surplus commodities affected by trade retaliation such as fruit, vegetables, beef, pork, poultry, milk, lamb and some processed food for distribution to food banks, schools and other outlets serving low-income individuals.

The USDA will also allocate $100 million to the Agricultural Trade Promotion Program to assist commodity organizations in developing new export markets for farmers.

Details regarding eligibility and payment rates will be released at a later date.