Geography and football have long divided Polk County. Folks on the east side gravitate to the Rockmart Yellow Jackets. People in the west support the Cedartown Bulldogs.

Now, county residents are putting their gridiron rivalries aside to unite behind the Polk County Show Team. It consists of ag students from Cedartown and Rockmart Middle Schools and both high schools who share a love of showing cows.

Cattle producers Glenn and Laura Robinson live in the middle of the county. When Glenn joined the Polk County Cattlemen’s Association (PCCA) in 2001, it had about 15 active members attending chapter meetings. When he became president in 2009, Glenn worked to increase membership, which has since increased to more than 220 members.

“There were no young people in our association when I first joined our cattlemen’s chapter, so I concentrated on getting young people involved,” Glenn said.

In 2016, Madison Atkins and Savannah Norman, Junior PCCA Chapter members, asked Glenn if he would help them start a show team for students.  Both had been FFA members in high school, Atkins at Cedartown and Norman at Rockmart, but neither showed cattle until college.

“I showed bulls at Berry College and really enjoyed it. The idea behind the project was we wanted kids without the ability to keep a calf at home or without the money to buy one to be able to experience showing,” Norman recalled. “We asked the Robinsons because they have always been passionate about helping children get 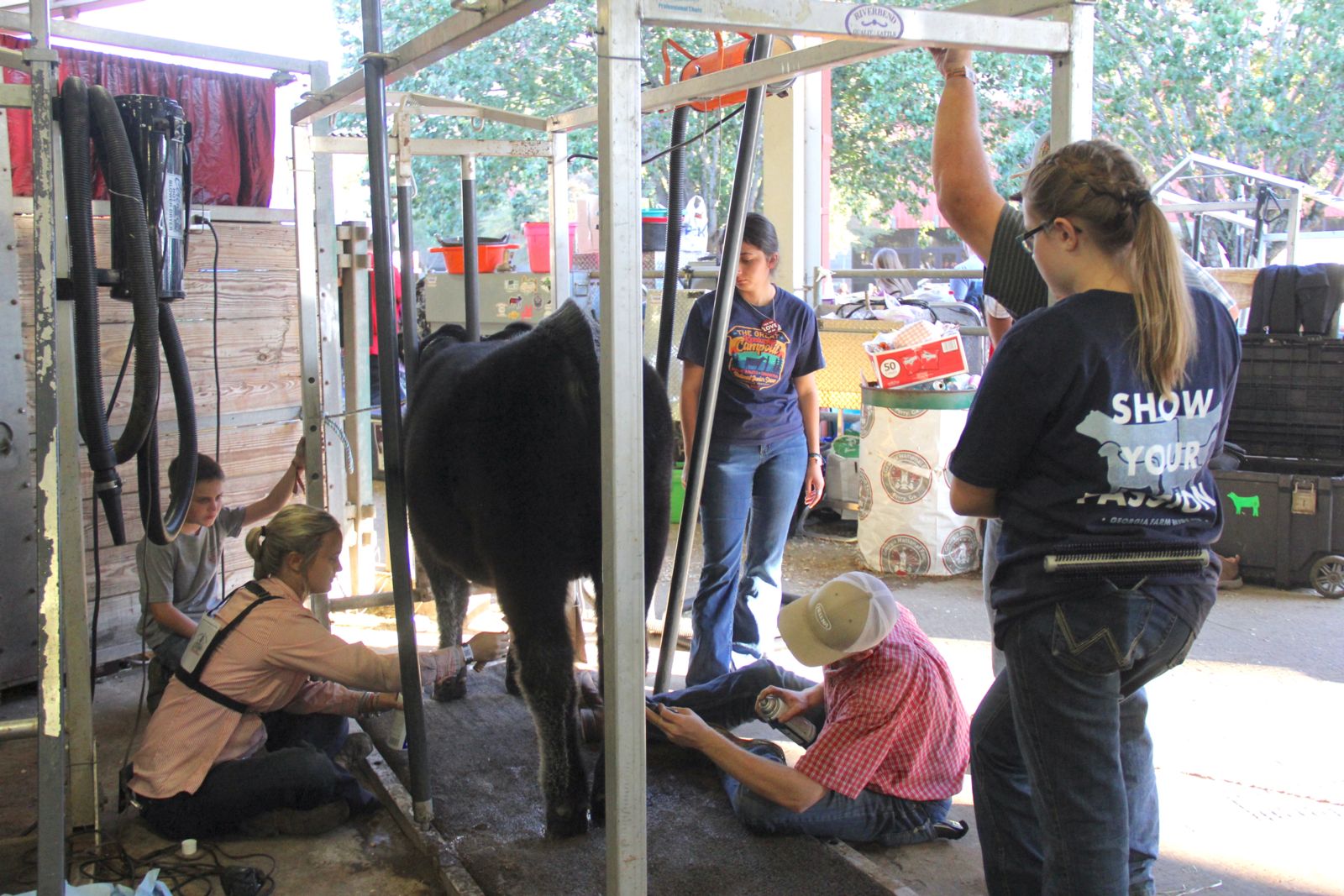 Members of the Polk County Show Team work together to groom a teammate’s heifer before it heads to the show ring. Members put school and individual rivalries aside for the good of the team. / Photo by Jennifer Whittaker

involved in agriculture. I knew they had entered their calves in the fair previously.”

The show team drew 12 kids its first year. For the team’s first couple of years, the Robinsons provided calves and feed for kids who didn’t have cattle but wanted to show. Team members trained and groomed their calves at the Robinsons’ farm.

By 2019, interest in the show team had grown so much the Robinsons decided it was time for the county FFA program to take over. Polk County had increased funding for its ag programs, hired multiple ag teachers and built an ag center at Rockmart High used by all Polk FFA students showing livestock.

Robinson remains involved with the team.

“Anything we need from Mr. Glenn, he’s there for us,” Polk County Young Farmer Advisor Jeff Hawkins said.  “His truck and trailer goes to every show hauling cattle along with the truck and trailer the school system bought us.” 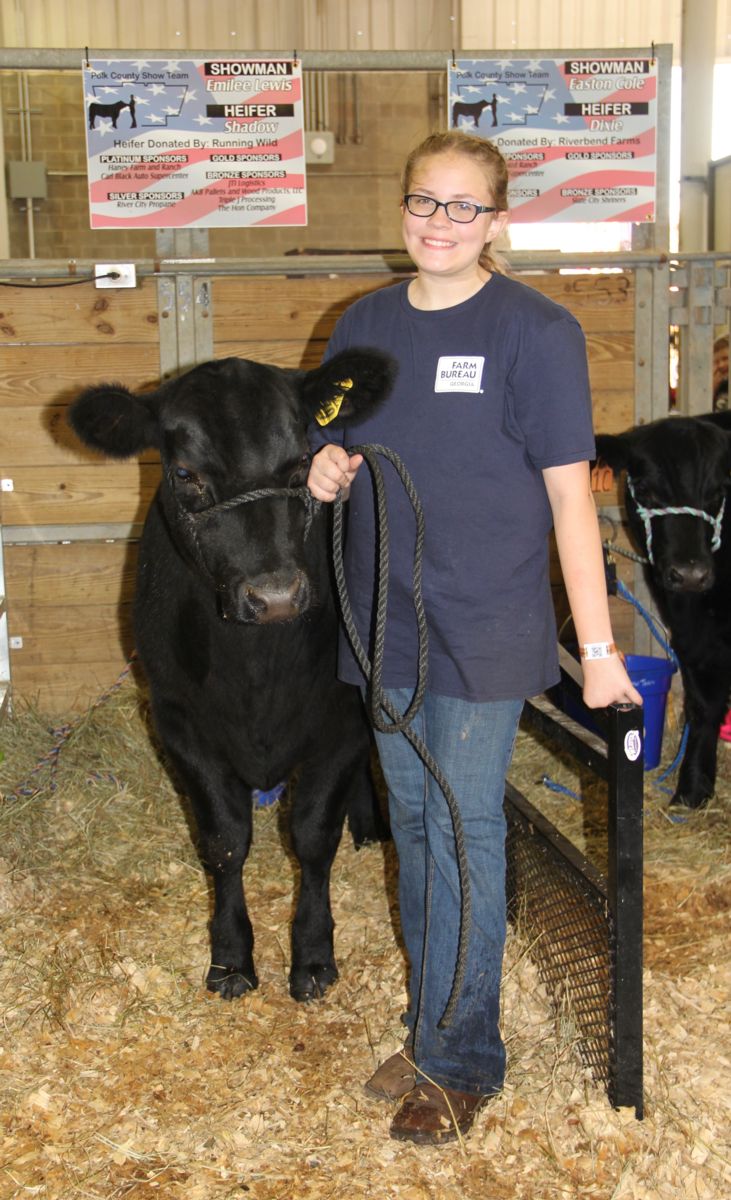 Now, the Polk County School District runs the show team like a sports program. The team has 24 spots for students at the middle or high schools. All interested students and their parents must attend an orientation meeting in February to learn what’s involved in showing.

To join the team, each student must raise $1,000 in sponsorships to help meet the program’s $67,000 budget. Students must also commit to spending time at the county livestock barn caring for, halter breaking and grooming their cattle. They must also participate in practices and certain shows.

About 16 local cattle producers donate cattle the students show. The county’s six ag teachers visit the farms in July to select cattle 5 to 10 months old. Once the cattle are housed at the livestock barn, students start preparing their cattle for county fair shows held in the area before heading to Perry for the Georgia National Fair shows in October.

In February, after the show season is over, the Polk County FFA program auctions the team’s cattle with proceeds going back into the team budget.

“Most of our kids couldn’t afford to do this if it weren’t for the producers donating their cattle and the agribusinesses and people who sponsor the kids. We’re very appreciative of the local support we get,” Hawkins said.

“We try to make it fun for the farmers who donate their animals by awarding a breeder of the year trophy that goes to the producer who scores the most points based on cumulative placings at all the shows the cattle compete at. That’s become a fun competition.”

This is the second year Cedartown Middle Schooler Emilee Lewis has been a team member.

“I got into this because my dad showed cows when he was young, and I always thought that was cool,” Emilee said. “The hardest thing about showing is in the beginning when you’re halter breaking them.”

Emilee says her Angus heifer, Shadow, likes to show her she’s the boss when they practice but “does good at shows.” The pair won the Coosa Valley Fair 6th Grade Showmanship prize and a showmanship prize at the Polk County Fair.

“We wanted her to show to learn responsibility,” Emilee’s mom, Laura Lewis, said.

Emilee’s dad, Todd, who showed cattle at the first two Georgia National Fairs, said, “I think it’s important for young people to be part of a team and learn how to support others. As a parent it’s amazing to me that these farms donate these calves. We’re grateful to them and Emilee’s sponsors.”

Rockmart Middle Schooler Eli Morgan started bottle feeding calves on his family’s cattle farm when he was three. He’s shown for three years and has shown his British White heifer, Peppermint Patty, with the team the past two years.

“I just like being around cows,” Eli answered when asked why he shows.

Eli’s dad, Drenn Morgan, who raises cattle, is proud to be a team coach.

“I’d like the world to know a countywide team does exist and what the team is doing for our kids,” Drenn said. “Last year, six of the team members went to the Georgia Jr. National on their own to show.”

While the rivalry in school athletics is very strong in Polk County, it isn’t a problem for the show team.

“This team is very unified. They’re very supportive of each other,” said Jennifer Smith, the Cedartown Middle School ag teacher. “When we’re at shows, everyone pitches in and helps clean the animal stalls. Getting it done becomes more important to them than whose calf it is or what school a team member is from.”

Anyone who has been involved with showing livestock knows it’s just as competitive as sports, and like sports, some students have better resources than others.

Smith said she and the other team coaches talk to the students about focusing on setting personal goals to become better cattle exhibitors rather than beating other people or animals.

“I want them to know they can accomplish goals without spending a fortune,” Smith said. “The reality of life is you have to make the best with the opportunities you have. There will always be someone better than you or who has better animals than you, but you can still be successful. Our successes may not be the same as others, but we are still having success.” 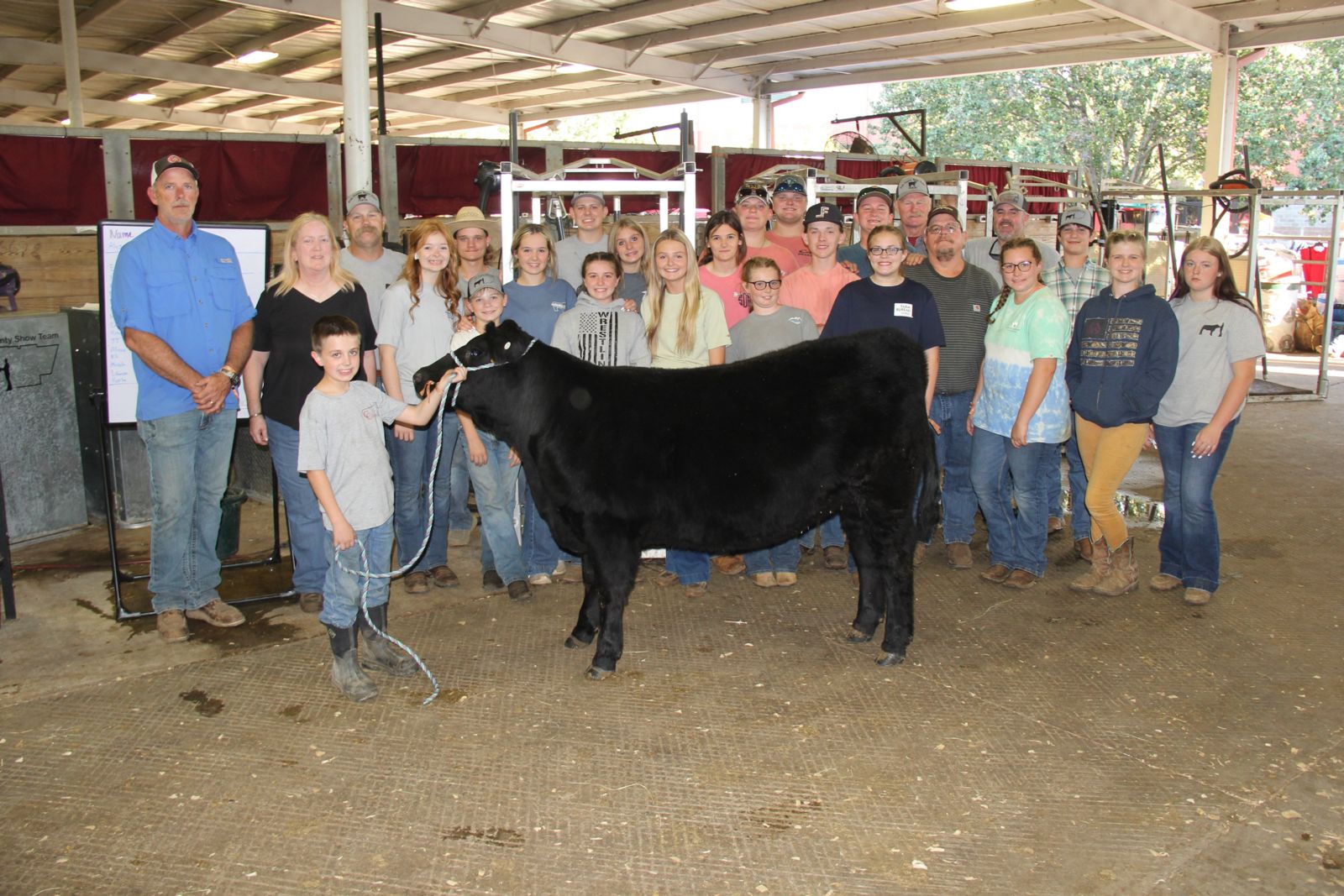 The Polk County Show Team is giving ag students a chance to learn about agriculture, responsibility & teamwork. Team members, county ag teachers and community coaches had a blast showing at the Georgia National Fair in October. /Photo by Jennifer Whittaker