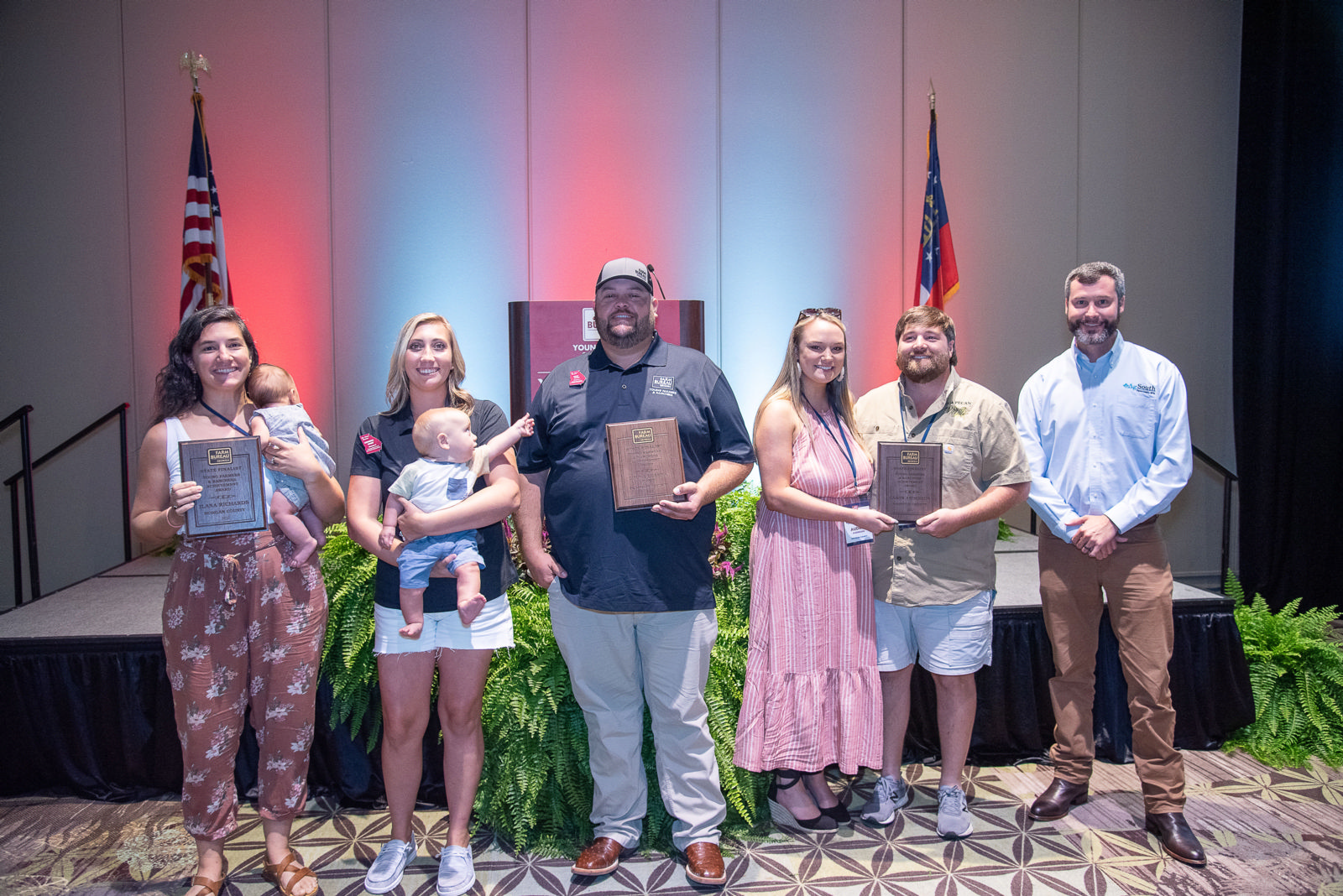 Colt and LeAnna Hart (second and third from left) of Franklin County won the GFB Achievement Award, which recognizes young farmers who earn the majority of their income from production agriculture.

Colt is a fourth-generation farmer who farms approximately 1,000 acres. He maintains a herd of approximately 600 cattle and raises broilers and goats. He also grows millet, ryegrass, Bermudagrass and wheat while providing a chicken litter service for other farmers. The Hart farm has hosted the Franklin County Championship Rodeo for 29 years.

The Harts live in Royston and have five children: Jolee, Briar, Sage, Laila and Trace.

As the Achievement Award winners, the Harts received a John Deere ATV with trailer, $500 cash and a farm sign sponsored by Farm Credit Associations of Georgia (represented by Zach Murphy in photo) and Lasseter Tractor. 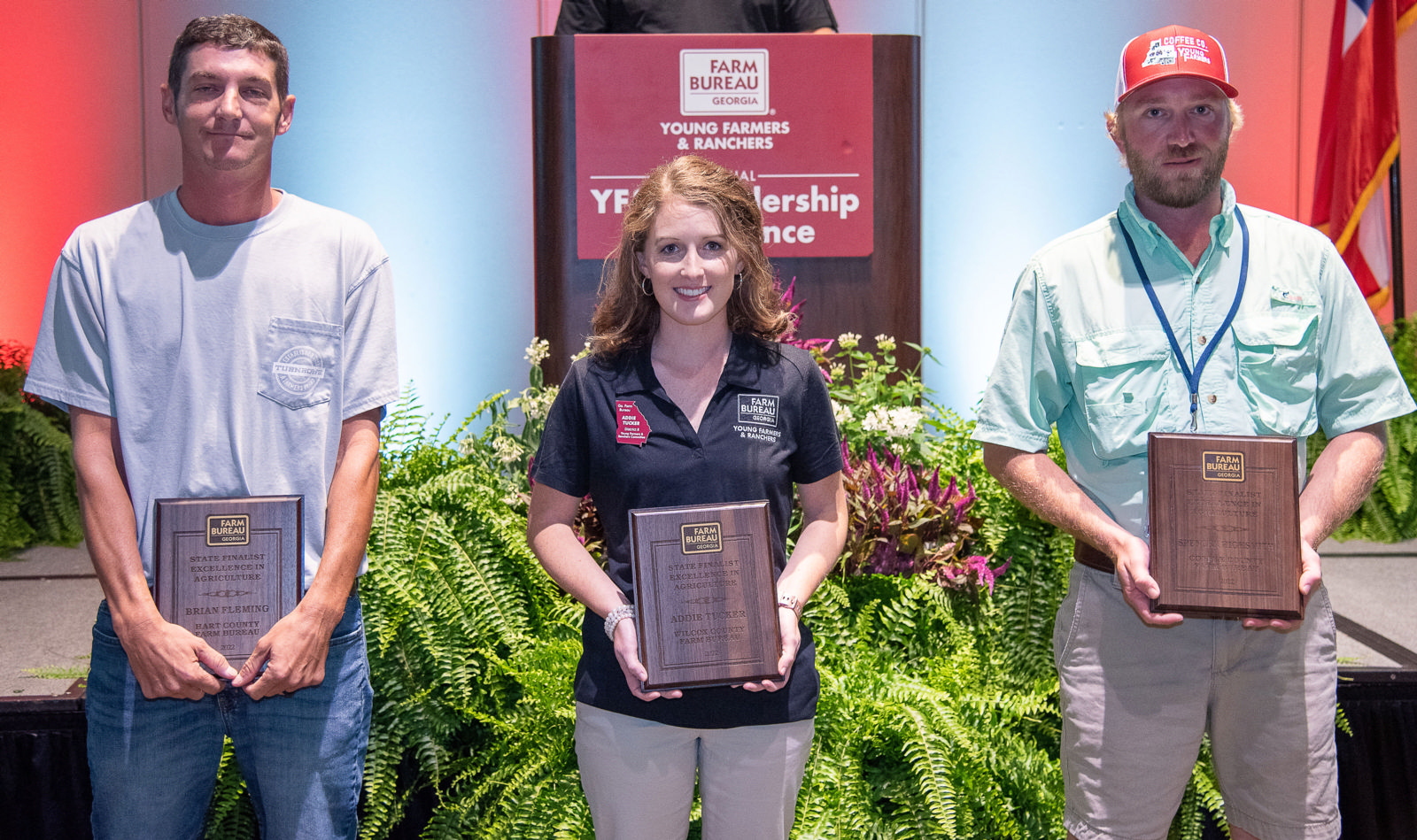 Brian Fleming (left) of Hart County won the GFB Excellence in Agriculture Award, which recognizes Farm Bureau members who are agricultural enthusiasts but do not earn a majority of their income as a farm owner.

Fleming, who has a bachelor’s degree in business administration from Emmanuel College, works as operations manager for PTL Agriculture, the family farm owned by his father, Bobby. The Flemings produce soybeans, wheat, oats, milo and corn on approximately 1,000 acres, along with maintaining a small herd of brood cows and growing hay. Brian also runs a small seed-cleaning operation that serves area farmers.

Brian has chaired the Hart County Farm Bureau YF&R Committee since 2014 and grew the county’s YF&R program from just himself to its current membership of about 35. He served on the GFB YF&R Committee from 2019 to 2021 and regularly visits local schools to teach students about agriculture.

Brian and his wife, Nicole, live in Canon with their two children, Deklyn and Sloane. 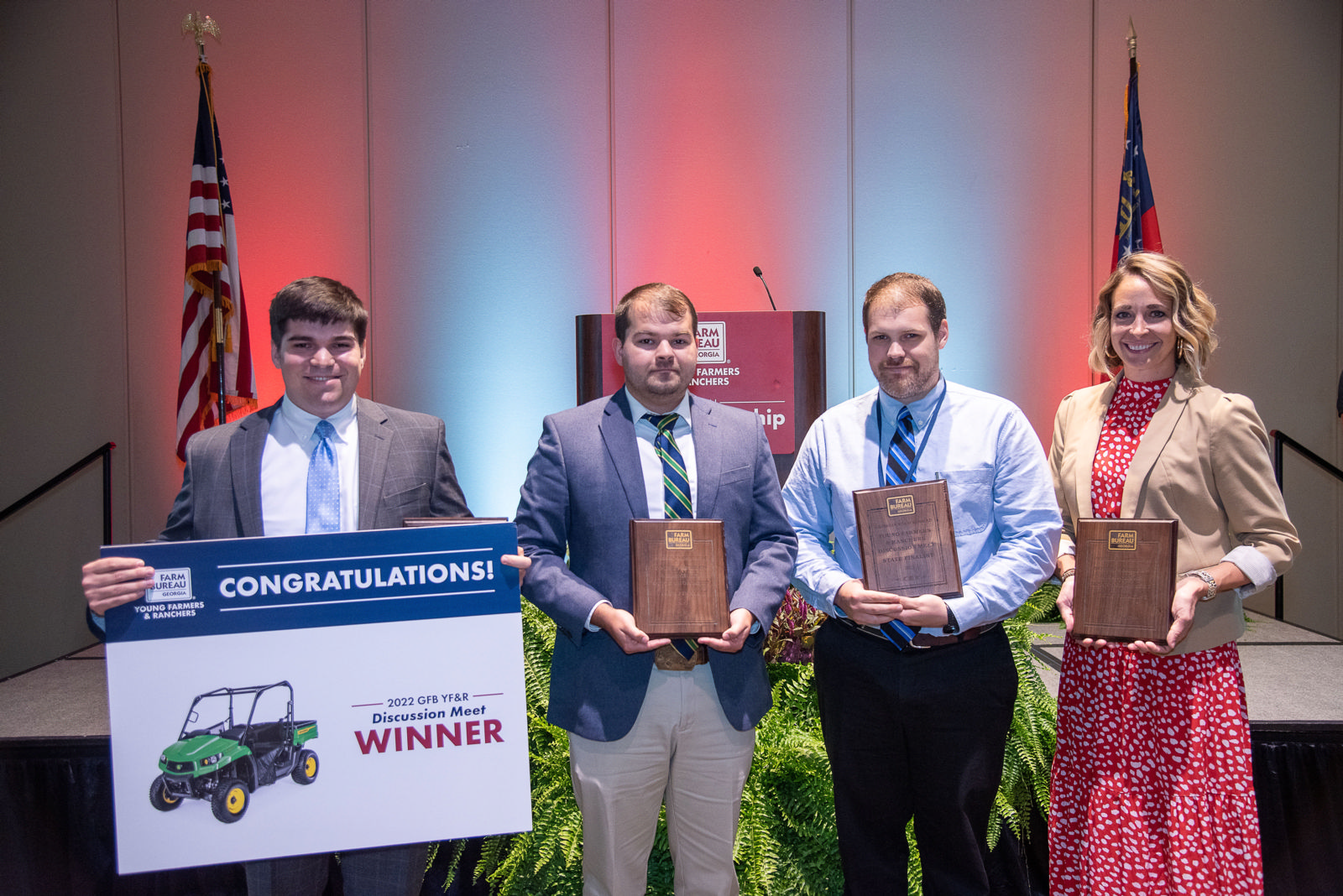 Sizemore, who graduated from the University of Georgia in 2021 with a degree in agricultural communication, is a student at the Mercer University Law School.

The other finalists were Ian Bennett (second from left) of Cook County, Josh Daniel (third from left) of Madison County and Whitney Murphy of Bulloch County. The runners-up received $500 cash sponsored by Georgia Farm Bureau.