Article and photos by Jay Stone

The dog, Mookie, guided by U.S. Customs and Border Protection (CBP) Agriculture Specialist Marko Collins, nimbly stepped around the girl and her family, sniffing them and their bags, tail wagging. The girl and her parents waited for the rest of their baggage to arrive on the carousels in the international terminal at Hartsfield-Jackson International Airport. They watched Mookie, more enamored than concerned. Within a minute, he’d moved on.

“To the dogs, it’s a big game of hide and seek,” said CBP Agricultural Supervisor Amabelle Gella. “If they find something, they get a treat.”

Mookie is one of the dogs in the Beagle Brigade that the CBP uses at many of the 328 U.S. international points of entry, including airports. The dogs seek out unauthorized plant and animal products that, left unchecked, might result in biosecurity breaches on U.S. farms, ultimately causing crop damage or livestock loss and financial harm to American farmers.

All of the beagles are rescued from shelters. For operational security reasons the agency doesn’t publicize the number of dogs deployed, CBP Spokesman Rob Brisley said. 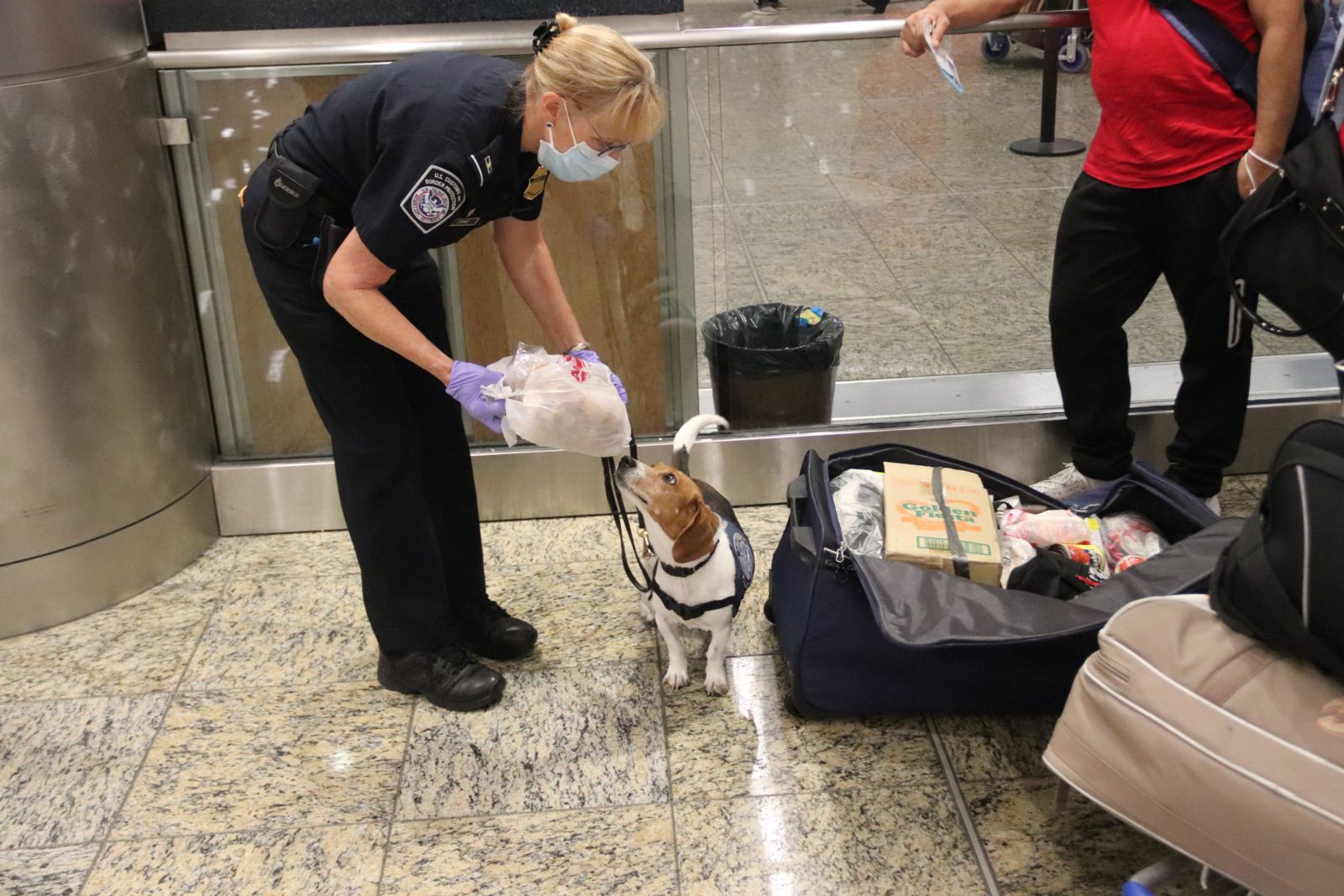 Candie sniffs a bag of pork rinds found in a passenger’s luggage.

Well-suited for the job

In their initial training at the USDA’s National Detector Dog Training Center in Newnan, the beagles are taught to alert handlers when they smell apples, oranges, mangoes, beef or pork. Once they begin working at the airport, they add contraband items to their nasal repertoire.

“They learn to generalize. Through the course of a beagle’s career, they can learn to recognize 50 or more odors. Hundreds, even,” Gella said.

Beagles were also chosen because of their agreeable disposition and size, Gella said. Inspecting a baggage claim area requires them to fit into tight spaces and move around lots of people and luggage.

“They are very smart dogs, and they’re willing to work all day for treats,” Gella said. 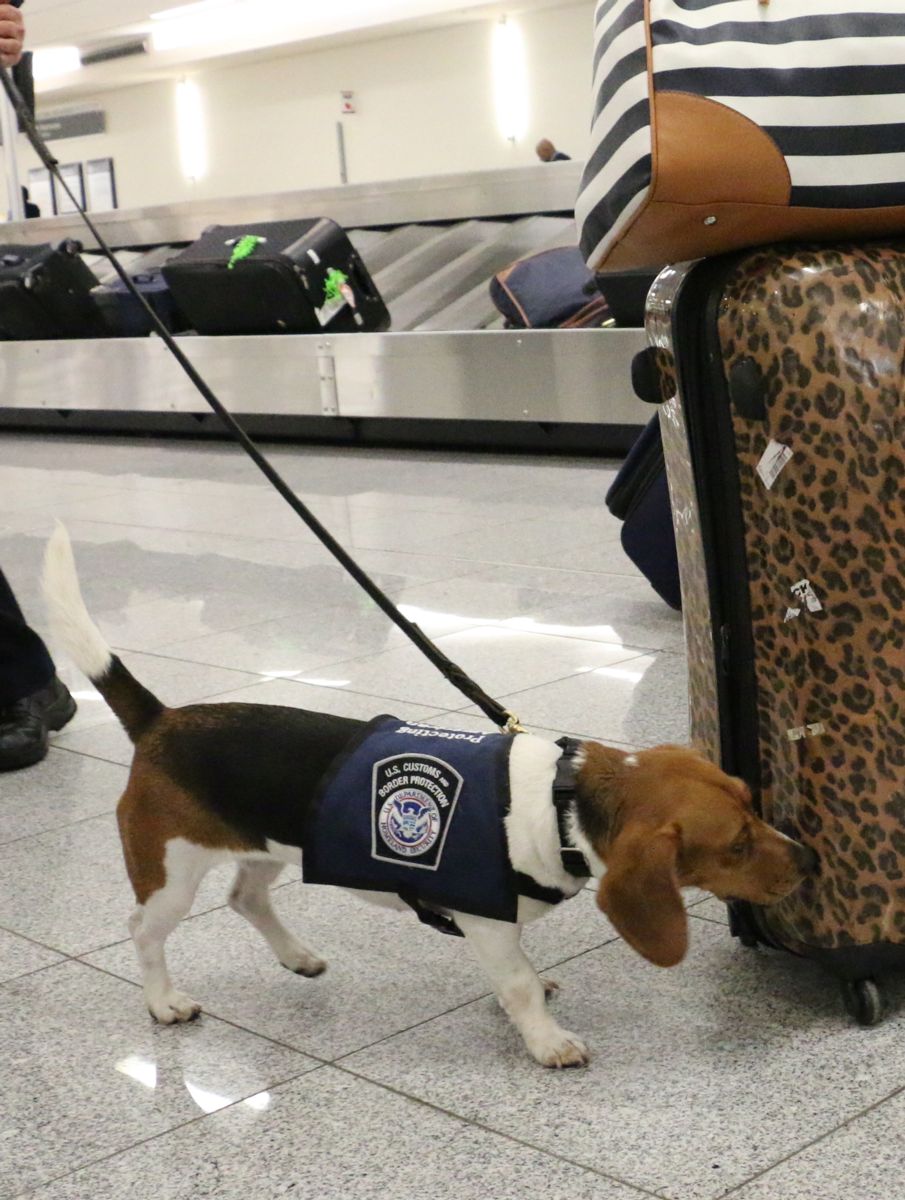 The dogs work in the federal inspection site, which for purposes of international travel is the U.S. border. The “border” includes customs and passport checks, international baggage claim, a secondary inspection area, the plane itself and the area where cargo is handled.

At baggage claim, Candie detected an apple in a passenger’s luggage and sat down, looking expectantly at her handler, who instructed the passenger to visit the secondary inspection area.

In this area, passengers are encouraged to declare any agricultural products in their possession. As long as passengers are honest with their declaration, they aren’t subject to penalties, Gella said. If they don’t declare ag products later found in their luggage, they’re subject to fines of up to $1,000.

Another family, returning from South Korea, had numerous bags of Korean pork rinds in their luggage to give as souvenirs, but Beagle Brigade Inspector Mox sniffed them out.

“The beagles are one of our most efficient tools to screen international travelers entering the United States,” Gella said. “They’re our first line of defense against invasive species arriving in the United States.”

The dogs can pick up scents of many types of food, plants and more. Some of the more exotic items they’ve detected include African gazelle jerky, Peruvian groundcherries and Nigerian weeds. They’ve also detected a small primate arm and rare orchids. 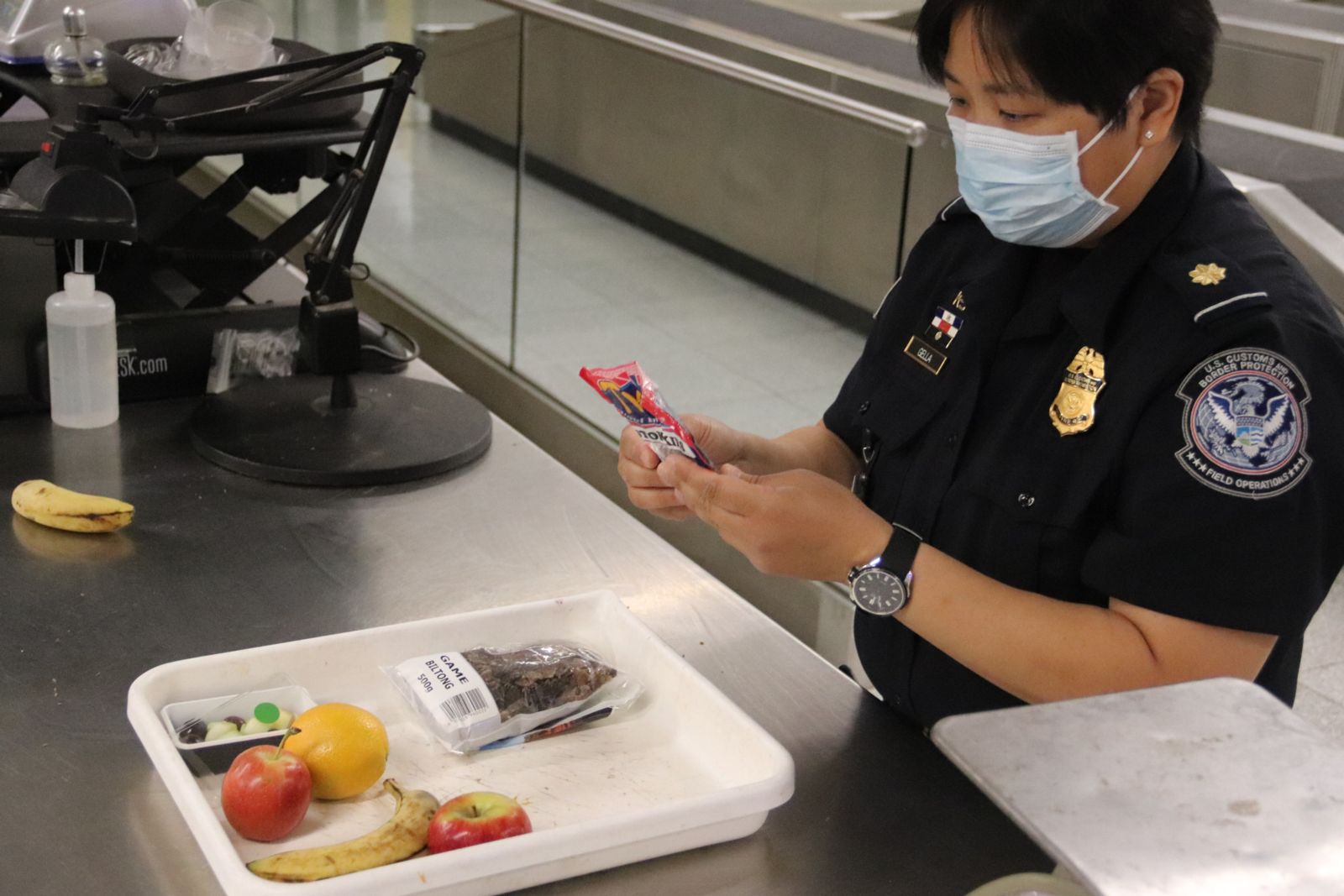 U.S. Customs & Border Protection Agricultural Supervisor Amabelle Gella looks through confiscated food items detected by the Beagle Brigade. Visit https://gfb.ag/APHISwhatsallowed  for guidance on what travelers can bring into the U.S.

The USDA’s Animal and Plant Health Inspection Service determines which products need to be stopped from entering the U.S. Multiple federal agencies are involved in preventing entry of invasive threats to agriculture. When a detected item is under the jurisdiction of an agency other than the USDA, those items are kept for that agency to further inspect.

Prohibited products vary according to a passenger’s country of origin. For instance, pork from countries that have had outbreaks of African Swine Fever is prohibited. If detected, the prohibited items are confiscated and incinerated on site.

South Africa, a popular international destination for big-game hunters, is known to have foot and mouth disease (FMD). The virus that causes FMD can live in soil, which hunters can pick up on their boots. As part of hunters’ entry process, the CBP must spray disinfectant on the shoes they wore hunting.

All in a day’s work

According to the CBP, one beagle can clear a flight of 120 people and their luggage in less than 30 minutes. In an eight-hour day, one dog can inspect 10-15 flights at the Atlanta international terminal.

CBP has a kennel on site where the dogs rest between flights. When their shift is over, the dogs are housed at a secure off-site location near the airport.

The dogs begin their careers between the ages of one and three years and retire at nine. In general, they work with the same handler all the time. When a beagle retires, its handler has the option to adopt it as a personal pet.

Then, because invasive pests and diseases are ever-present threats, another dog noses in. 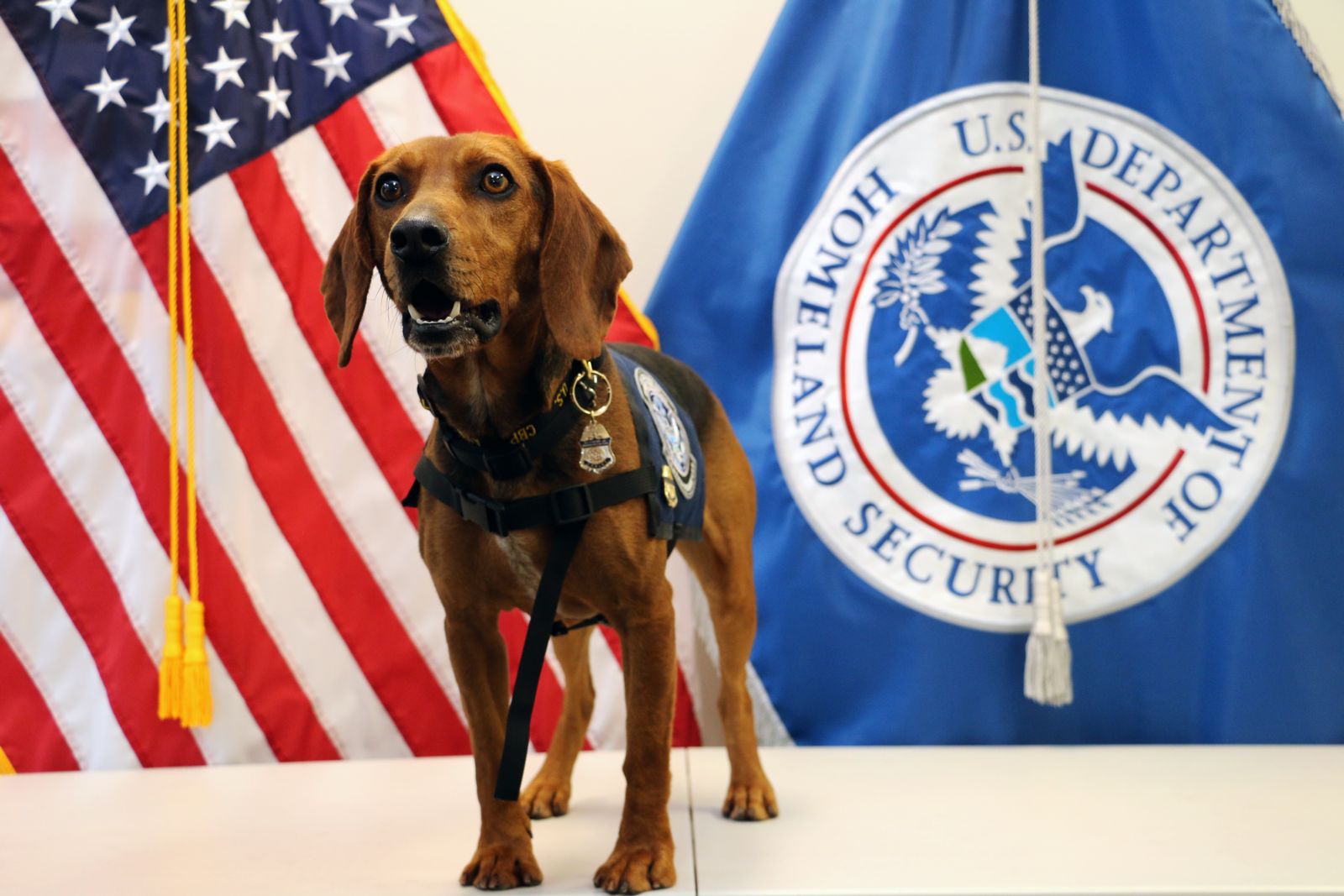