Georgia Farm Bureau members and its employees have worked together to help farmers since the organization was founded on June 17, 1937. Our members and county staff are the heart of GFB.

Georgia Farm Bureau leaders ran the organization with no state employees until 1941 when the organization’s second president, Harry Wingate, became the organization’s first full-time paid employee. County chapters relied on members or the help of Extension employees to manage membership records and local programs until the GFB Insurance Company opened in 1959 and counties began hiring staff.

To celebrate GFB’s 85th anniversary, we asked Charlie Frank and Betty Harris to share their experiences as lifelong members. Mr. Harris has been a Farm Bureau member for 73 years. Jeanne Taylor, GFB’s longest serving county office manager with 60 years of service, provided insight on how county operations have changed.

Charlie Frank Harris was 8 in 1937 when GFB was established. He was 13 in 1942 when his father, J.R., and other farmers in the county formed the Crawford County Farm Bureau (CCFB).

He recalls CCFB’s first office being at the local draft board office as the Selective Service secretary also served as the county Farm Bureau’s business secretary. After a year or so, CCFB relocated to a gas station before moving to another office and then building its current office in 1997.

“I started going with my father to county Farm Bureau meetings in the 1940s,” Charlie recalled. “They talked about how we could get better prices for our crops. Our Extension agent gave us the latest fertilizer and seed recommendations and advice for raising livestock People were figuring out ways to better raise cattle and hogs back then.”

Harris and his nine siblings grew up growing cotton, corn, wheat, oats, sugar cane and vegetables on the family’s farm five miles away from where he and his wife, Betty, live today on the farm where she grew up.

When Charlie joined Farm Bureau as an adult at age 20 in 1949, membership dues were $3.

“For a farmer that could be worth three days of work,” Charlie said. 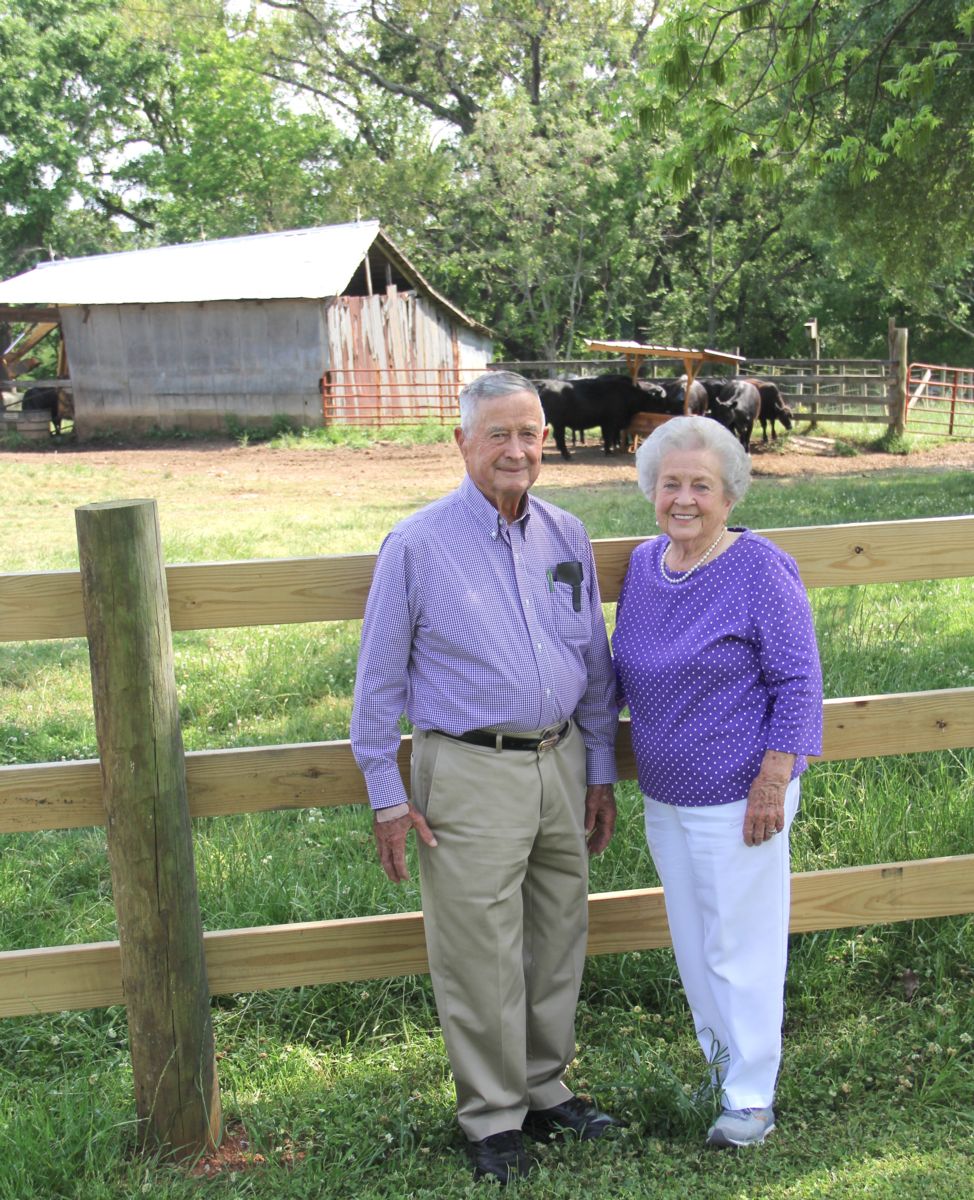 At the time, his father got $2 to $5 for seven-week-old pigs sold to families to raise for meat.

Betty says her father, Hoke Bennett, who was a dairy farmer, belonged to CCFB but didn’t have time to attend the meetings. While they dated, Betty knew Charlie attended Farm Bureau meetings but had no idea what a big part of her life the organization would become when they married in 1952.

The Harrises managed a cattle farm for absentee owners until 1957, then began dairy farming with Betty’s parents. They bought the farm from the Bennetts in 1972 and dairied until 1997, when they started raising beef cattle and hay.

Charlie is a past CCFB vice president, secretary and was president from 1961-62. For the last 60 years he’s served as CCFB treasurer.

“As a member of an organization I want to be able to see a record of how the money has been spent, so that’s how I’ve approached being treasurer,” Charlie said. “I will not vote for a budget that does not balance itself.”

Under Charlie’s guidance over 15 to 20 years, CCFB saved the money it needed to build its current office. The county was able to keep construction costs low thanks to CCFB member Larry Cooley furnishing the construction labor and other members helping out.

When asked why he’d continued to be a Farm Bureau member for 73 years, Charlie said, “I’ve always thought Farm Bureau was the best organization for farmers to have a voice in Atlanta and Washington and for building a relationship with our representatives and senators.”

The Harrises recall attending their first GFB convention in the early 1970s before the event moved from Macon to Jekyll Island.

“We drove back and forth from Musella to Macon for the two days because we had to make sure the cows were milked,” Betty recalled. “I remember there being a little red wagon given away as a door prize that first year that I really wanted, but I didn’t win it.”

Once the Harrises' three sons - Frankie, Edd and Steve – were old enough to do the milking with Betty’s parents supervising, the couple were able to attend the conventions on Jekyll Island.

“Going to convention was really our vacation because we didn’t go to the beach during the year and it’s still that way to me,” Betty said.

“Attending a national convention shows you that Farm Bureau is a big organization,” Betty said.

Betty began serving on the CCFB Women’s Committee in 1975 and is still an active committee member. She chaired the CCFB committee for many years.

“Our county women’s committee has always had a booth at the school Farm Days to promote Georgia commodities,” Betty said.

She represented the GFB 5th District on the GFB Women’s Leadership Committee from 2001-2004.

Winning the 1986 GFB Dairy Dessert Contest for her ‘Heavenly Banana Delight’ is one of Betty’s favorite Farm Bureau memories. She won the contest’s GFB 5th District prize in 1984 and placed second in the state contest with her “Frozen Fluffy Strawberry Pie.” In 1985 Betty’s  “Frozen Peach Fantasy Pie” won her the 5th District award again. Third time was a charm in 1986 when Betty captured her district prize for the  third consecutive year along with the state prize, a Bahama vacation for two.

Betty recalled being surprised when then-GFB President Bob Nash called out her name as the winner. “I had gotten my mind on something else at that moment,” she said. “I was really shocked.”

An article about Harris’ win that ran in the July 1986 GFB News quoted one of the contest judges as saying that Betty’s recipe won because it used readily available ingredients and was easy to prepare.

3 or 4 bananas 3 tablespoons of chocolate syrup

• In a large bowl mix instant pudding, condensed milk, and sweet milk together for two minutes or until well blended. Refrigerate for five to ten minutes.

•Whip the whipping cream. Add the whipped cream and the sour cream to the chilled milk and pudding mixture.

Jeanne Taylor married into farming and Farm Bureau when she and her late husband, Jerry, tied the knot in 1958.

Her father-in-law, Clifford Taylor, was a dairy farmer and grew tobacco. He was also the Bacon County Farm Bureau (BCFB) president from 1957 until he died in 1960.

“We lived with my husband’s family and were farm hands. In the first four years of marriage, I loved being a farmer’s wife and thought my life was set,” Jeanne said.

Her father-in-law was among the GFB voting delegates at the 1958 convention who voted to establish the GFB Insurance Company.

In 1961, BCFB’s first agent left, giving Jerry the chance to work for BCFB as an insurance agent.

In 1962, Jeanne joined her husband at the BCFB office after the county’s first secretary left. Sixty years later, she’s still holding down the fort.

“My father-in-law instilled in us the value of Georgia Farm Bureau and the need for an insurance company designed for the farmer’s needs,” Jeanne says. “After he died, we worked hard at recruiting new members and getting members to rejoin. The entire organization was a huge benefit to the 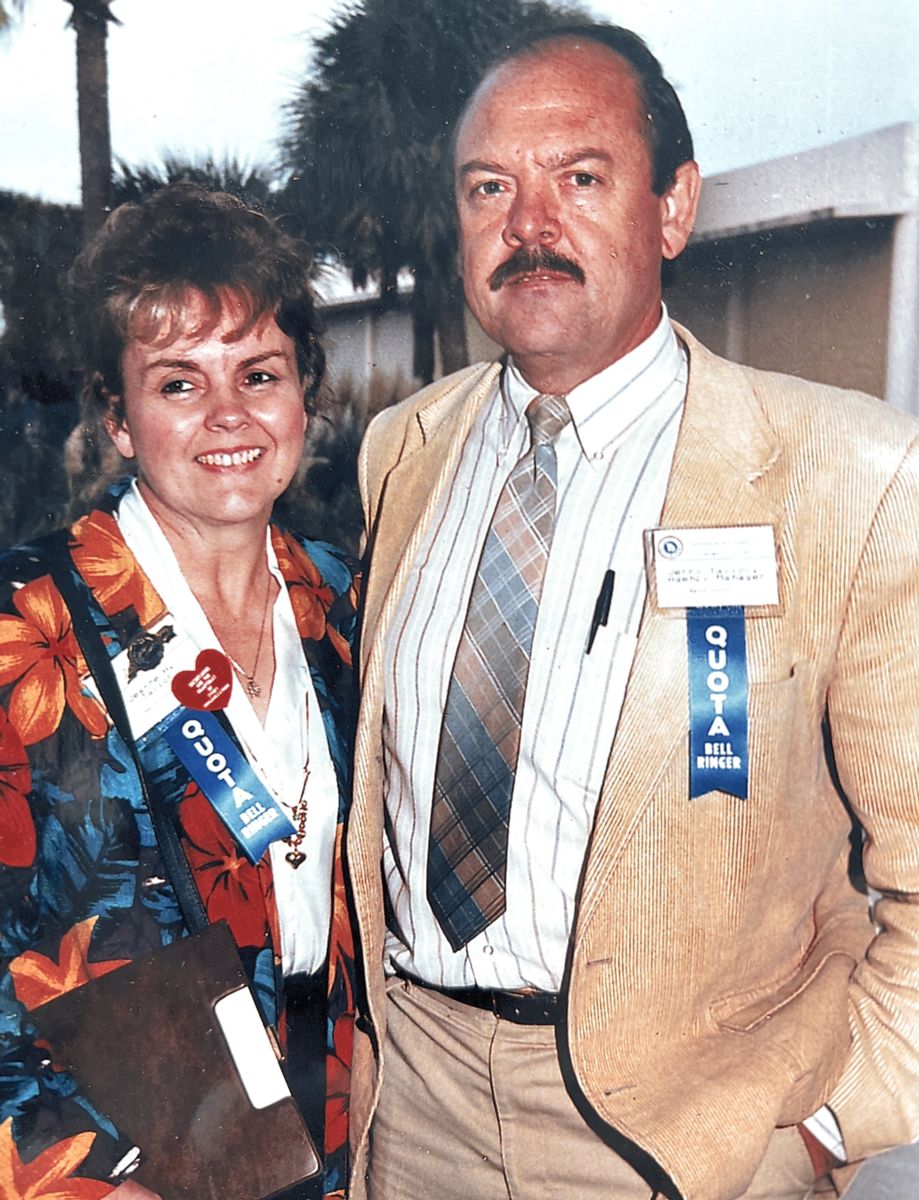 Jeanne & Jerry Taylor attend a GFB convention in the 1990s.

farmers, and we were a farm family.”

Jerry later became the BCFB agency manager and retired on Dec. 31, 2005, with 44 years of service.

Jeanne recalls getting a list of farmers’ names from the Extension office in the 1960s and ‘70s to recruit members. Jerry, the county directors and Jeanne would divide the list of potential members and call or visit the farmers to ask them to join Farm Bureau.

She remembers recruiting a farmer who had never been a Farm Bureau member.

“His wife answered the door and said he wasn’t going to join and that he would hurt my feelings if I asked. I told her I’d like to try. She sent me to the feedlot. The farmer told me 'No.'  when I told him my purpose for visiting, but I proceeded to follow him from the feedlot to the hay barn and into the hogpen expounding on all the benefits and reasons he should become a Farm Bureau member,” Jeanne recalled. “He never said a word until we got back to the house. When he walked back to the house, I was still hot on his heels.  He told his wife to write me a check and said if he wanted to join again, he would come into the office.”

Jeanne also remembers BCFB’s first office being an 8x10 foot space in the Satilla Rural Electric Administration Building before they moved to the county Extension building in 1964. In 1969, a veterinarian’s office came up for sale, and then-BCFB President W.C. Scott decided the county Farm Bureau should buy it.

“I was skeptical because our phone bill was our only expense, and I wasn’t always paid, but Mr. Scott had faith and was thinking long term.” Jeanne said.  “He and Jerry sold debentures to raise the money for the down payment.”

Scott, Jerry and Jeanne remodeled the building, rented out two offices and did maintenance on the building to make ends meet.

“Until we purchased the current office in 1969, Jerry and I shared one large wooden desk. He worked at one end, and I worked on the other,” Jeanne said. “Good thing we were fond of each other.”

Through the years, Jeanne has seen changes in her job description, too, like selling tires, twine and batteries through the former GFB Service Company. From the late 1960s into the ‘70s, Farm Bureau trained office managers to file farmers’ income taxes. After surviving an audit, she told her directors she was done doing taxes.