Young farmers and ranchers from across the state met on Jekyll Island July 14-17, for Georgia Farm Bureau’s YF&R Leadership Conference. The conference taught farmers and ag professionals between the ages of 18 and 35 how to advocate for agriculture and gave insight into how Farm Bureau advocates for farmers.

GFB President Tom McCall shared the experience he and his wife, Jane, had as members of the YF&R Program and encouraged the young farmers attending the conference to take home the things they learned at the event to serve their county Farm Bureaus.

“The Young Farmers and Ranchers Program means a lot to me and Jane. Y’all are the lifeblood of this organization,” McCall said. “I hope each and every one of you learned something you will take home and share. I’d like to see some of you serving on your county Farm Bureau boards and on the GFB Board and in the state legislature.”

consumers to share the positive things about how their food is grown. Radke has spent the last 15 years pushing back against animal rights and environmental activists who attack livestock agriculture, but says she thinks farmers and ranchers can make better traction to dispel ag myths by posting on social media the positive things they are doing on the farm to care for their animals.

“Don’t react defensively when consumers ask questions about something negative they’ve heard about farming,” Radke said. “If you tell someone you’re a dairy farmer or raise beef cows and the consumer asks, ‘So you raise cows that produce methane that is destroying the ozone layer?’ – Don’t respond defensively! Remember that we all only understand what we’re exposed to on a regular basis and most consumers don’t have a basic understanding of livestock production.” 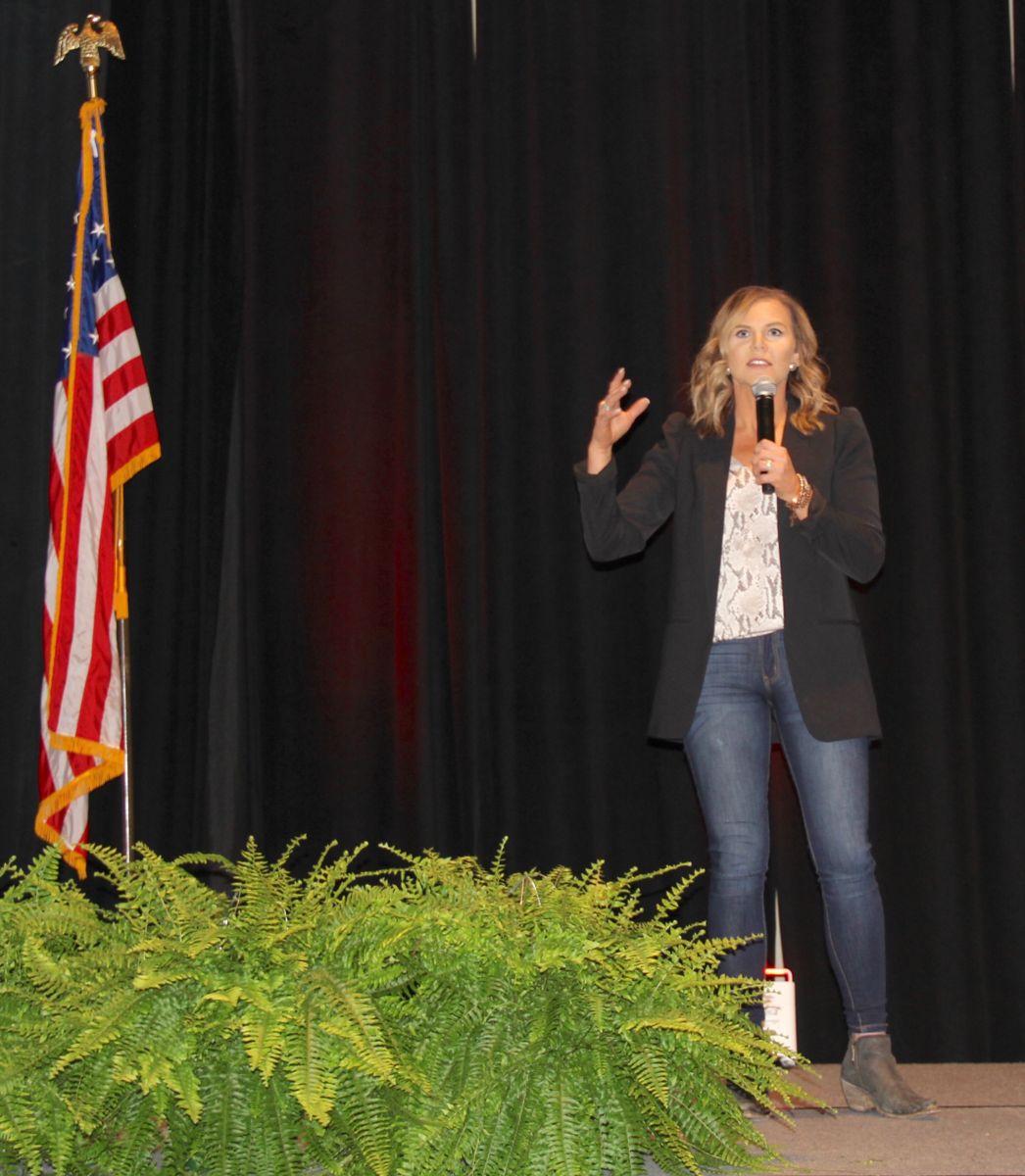 Using Radke’s advice, a good response to this scenario might be to answer, “Did you know animal agriculture contributes less than 3% of U.S. greenhouse gas emissions? Research at Oxford University and the University of California, Davis has shown as long as U.S. dairy and cattle producers have total constant herd numbers or even total decreasing herd numbers, they are not adding additional methane to the atmosphere.”

Radke shared how talking to a Wall Street stockbroker in 2012 at an airport led to him contacting her a few weeks later to get a rancher’s perspective on lean finely textured beef when ABC News ran its “pink slime” story. Her NYC friend contacted her again last year during the COVID-19 pandemic when beef was hard to find to learn how he could buy beef straight from a cattle producer.

Nelson Powell, a North Carolina hog farmer and relations manager with Rabobank, encouraged farmers to look at everyday interactions with their nonfarming friends, neighbors and family members as an opportunity to share what, how and why farmers do the things they do to raise their livestock and grow their crops. 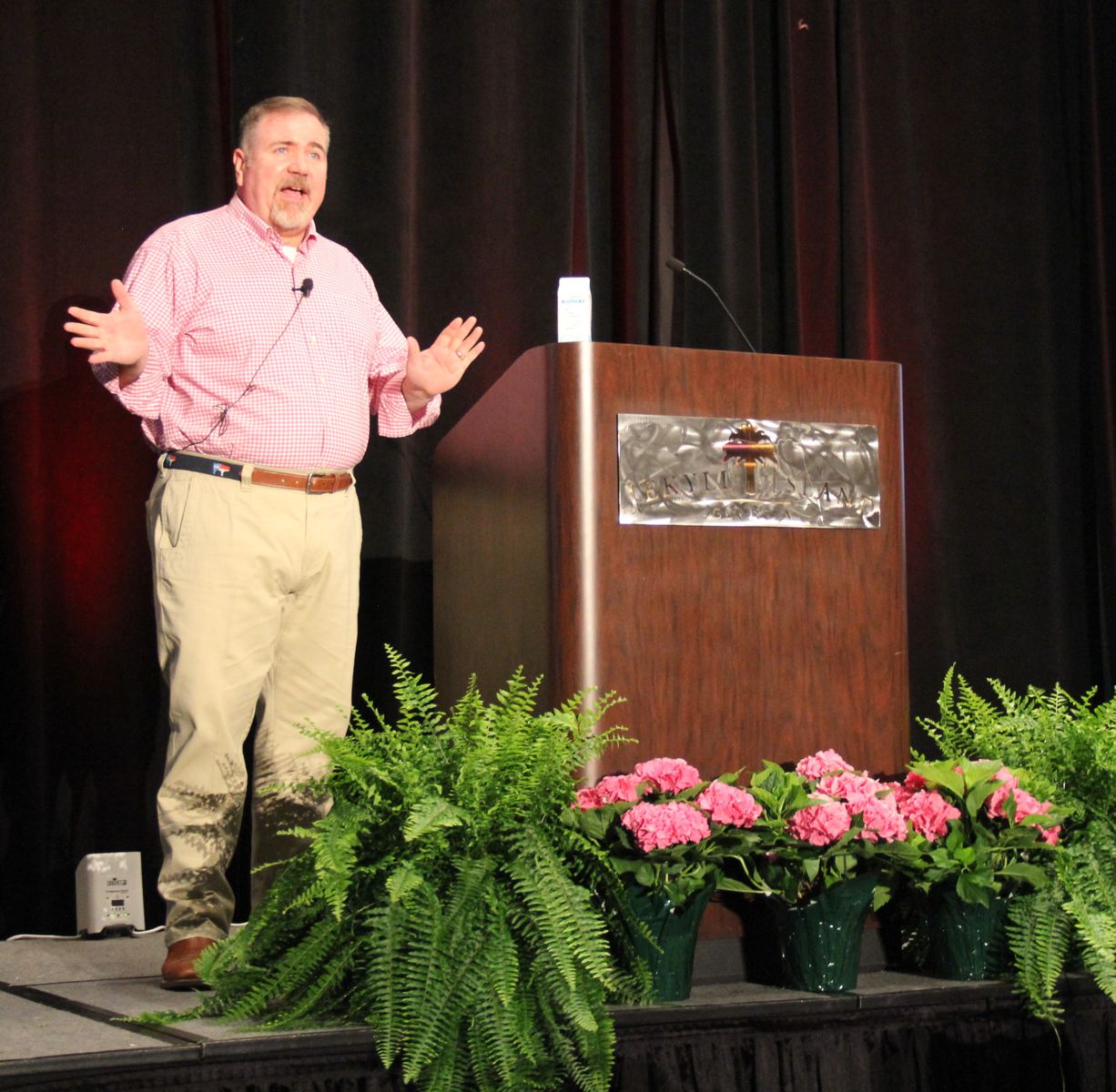 “We’ve got to stop thinking it’s someone else’s responsibility to advocate for agriculture. It’s not always fun, but it’s beneficial to us as farmers,” Powell said.

To increase the chances that people will ask him questions about farming, Powell has placed a hog sticker that says NC Farmer on the back of his RV and wears a pig lapel pin.

When talking with people who have an opposing view of agriculture, Powell encourages farmers to resist the temptation to berate their beliefs because it will alienate them and keep them from hearing what you have to say about farming.

“You’ve got to realize that you are both on the same level playground, like a balanced seesaw,” Powell said. “If you berate someone’s value’s or elevate your beliefs, it lowers them like a seesaw to the point that you are diagonally opposite each other.”

Powell also encourages farmers to remember that what you think you're saying may not be what the other person will hear. Powell shared an entertaining story of traveling in Australia with a co-worker.

Their Uber driver asked them what brought them to Australia. The co-worker said they were there with Rabobank, but the driver heard, “We’re here to rob a bank,” and stopped the car to leave them.

Think about phrases you use to describe what you do around the farm and if there’s a better way to explain it to a consumer.

Members of GFB’s Public Policy team shared how they are advocating for Georgia agriculture.

GFB National Policy Counsel Tripp Cofield discussed the Infrastructure Investment & Jobs Act (H.R. 3684). After the conference, the Senate passed the bill on Aug. 10 with a bipartisan vote of 69- 30. The Senate bill provides $1.2 trillion for infrastructure projects over 8 years with almost $550 billion in new spending over the next 5 years. It invests $110 billion in U.S. roads and bridges, $65 billion for broadband, and $17.3 billion for ports and inland waterways.

The Senate package does not pay for the infrastructure projects with tax increases or changes to the stepped-up basis that determines how inherited assets are valued for tax purposes. The Senate’s legislation has been sent to the House where the timeline and prospects are less clear.

The partisan reconciliation bill being drafted by the House and Senate committees in early September includes changes to stepped-up basis. Visit www.gfb.ag/AFBFstepupbasisanalysis to learn how stepped-up basis allows American farm and small business owners to pass their operations to their heirs without forcing them to sell land or other assets to cover the taxes.

GFB Advocacy & Policy Development Coordinator Katie Duvall made the case for GFB members to support the organization’s legislative activities with some eye-opening voting statistics: 1) As of 2019, 60% of Georgia’s then 10.6 million population lived in Metro Atlanta. 2) The following counties have the highest number of registered voters: Fulton, Gwinnett, DeKalb, Cobb, Chatham & Clayton – all counties where voters have little understanding of agriculture.

Duvall encouraged the young farmers to subscribe to GFB’s Legislative Reports, listen to the Growing On Podcast and participate in future “I Farm. I Vote.” campaigns designed to educate candidates and voters about ag issues.

Canadian farmer and motivational speaker Chris Koch, who was born without arms or legs, encouraged the group to have a positive mindset. He attributes growing up on a farm and his family for giving him his “I can do anything,” attitude for life. Koch encourages parents and farmers to give their children and employees room to learn how to do things on their own.

“Push yourself outside your comfort zone,” Koch said. “All those things you dream about doing - DO them.” 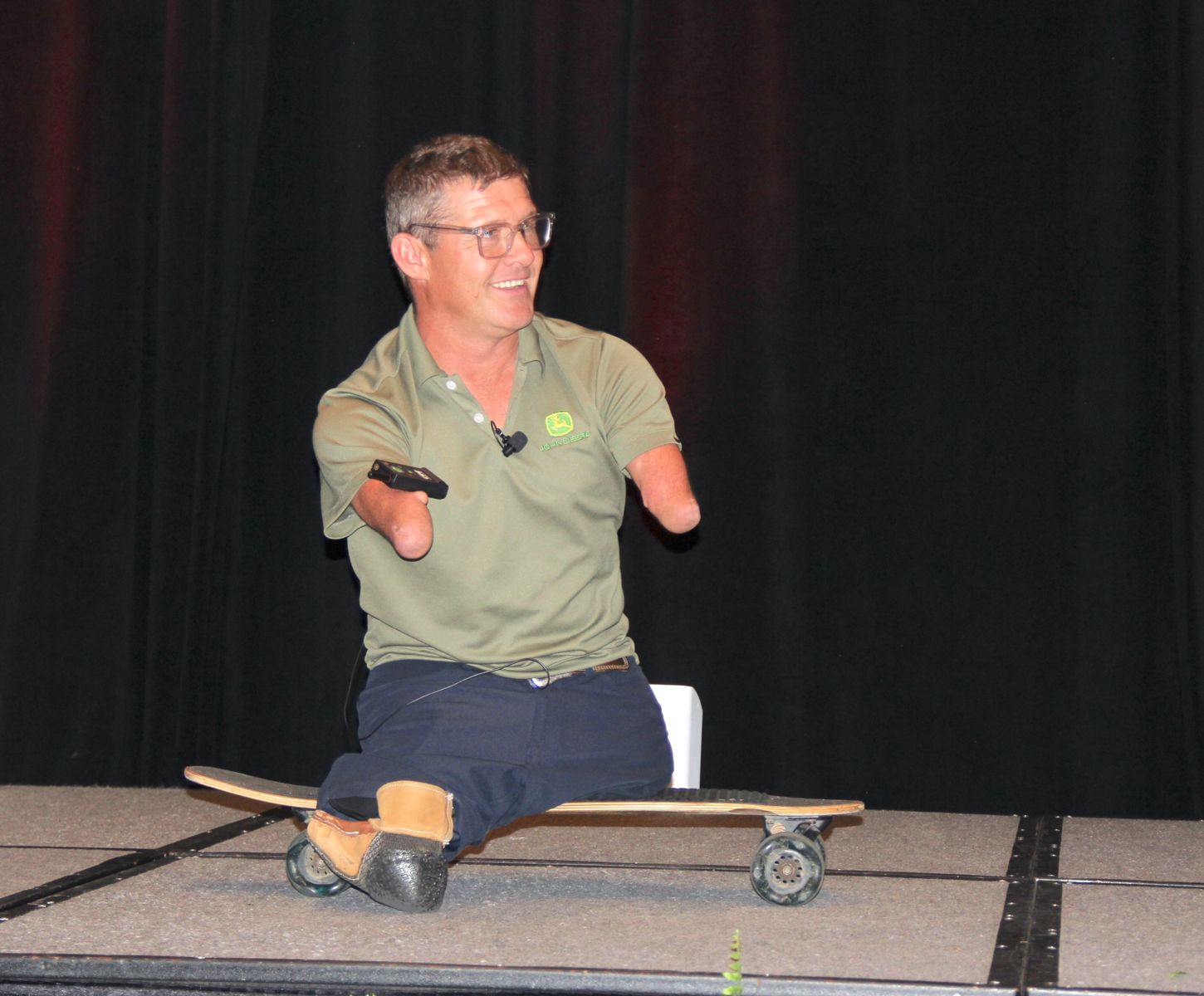 Koch says our minds and attitude are the biggest obstacles we have to overcome.

“My biggest struggles are when I let the six inches of space between my ears get in my way, not because I don’t have arms and legs,” Koch said. “We’re all battling something. Be grateful for the things you do have instead of focusing on the things you don’t.”