Although the 2020 Georgia National Fair is canceled, the Georgia 4-H and FFA livestock shows held at the fair are expected to go on – as of  press time.

To comply with COVID-19 recommendations set by Georgia and the Centers for Disease Control, the shows will  be  held as private events open only to exhibitors, their immediate  families and project support staff. No general admission spectators will be allowed on the fairgrounds.

The fall shows will be livestreamed on Walton Webcasting's social media  platforms Oct. 9-11 and Oct. 15-17 thanks to  Georgia Farm Bureau.  Visit www.waltonwebcasting.com to watch. 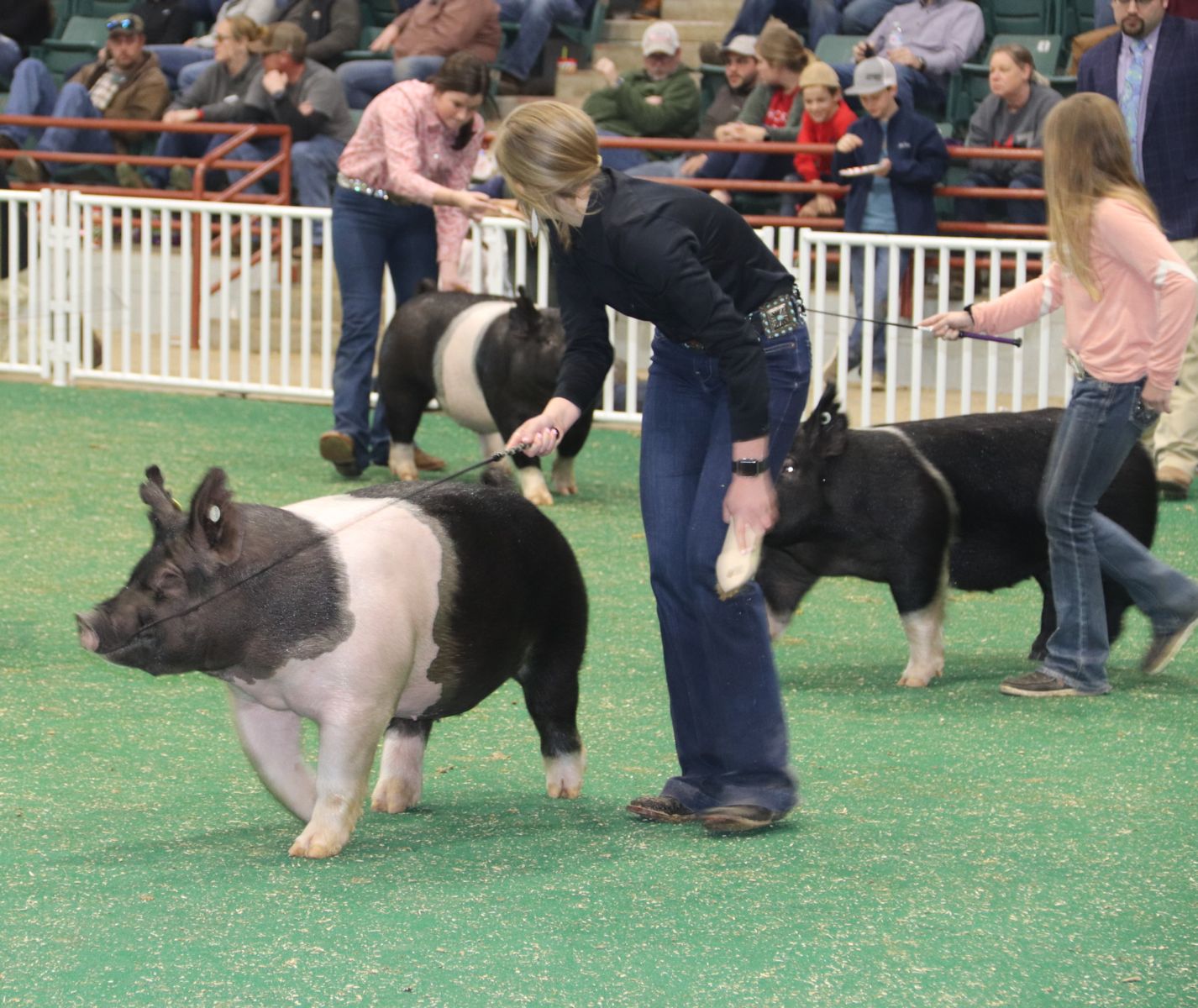 The last three competitions of the 2020 Georgia 4-H and FFA Livestock Shows - the Market Goat-Doe, Market Goat-Wether and Market Lamb -  will be among the numerous livestock events held at the Georgia National Fairgrounds & Agricenter  (GNFA). GFB will sponsor the grand champion awards for these three species for the ninth year.

As Georgia youth prepare for the fall shows, let’s celebrate the six exhibitors who won grand champion species awards during the 30th Annual Georgia Junior  National Livestock Show in February at the GNFA in Perry.

GFB awarded the coveted grand champion belt buckles and a total of $13,000 in prizes to six exhibitors whose animals livestock judges deemed to be the best of their species. Visit www.gfb.ag/20GAJRNatLivestockShow  to see more photos from the GJNLS. 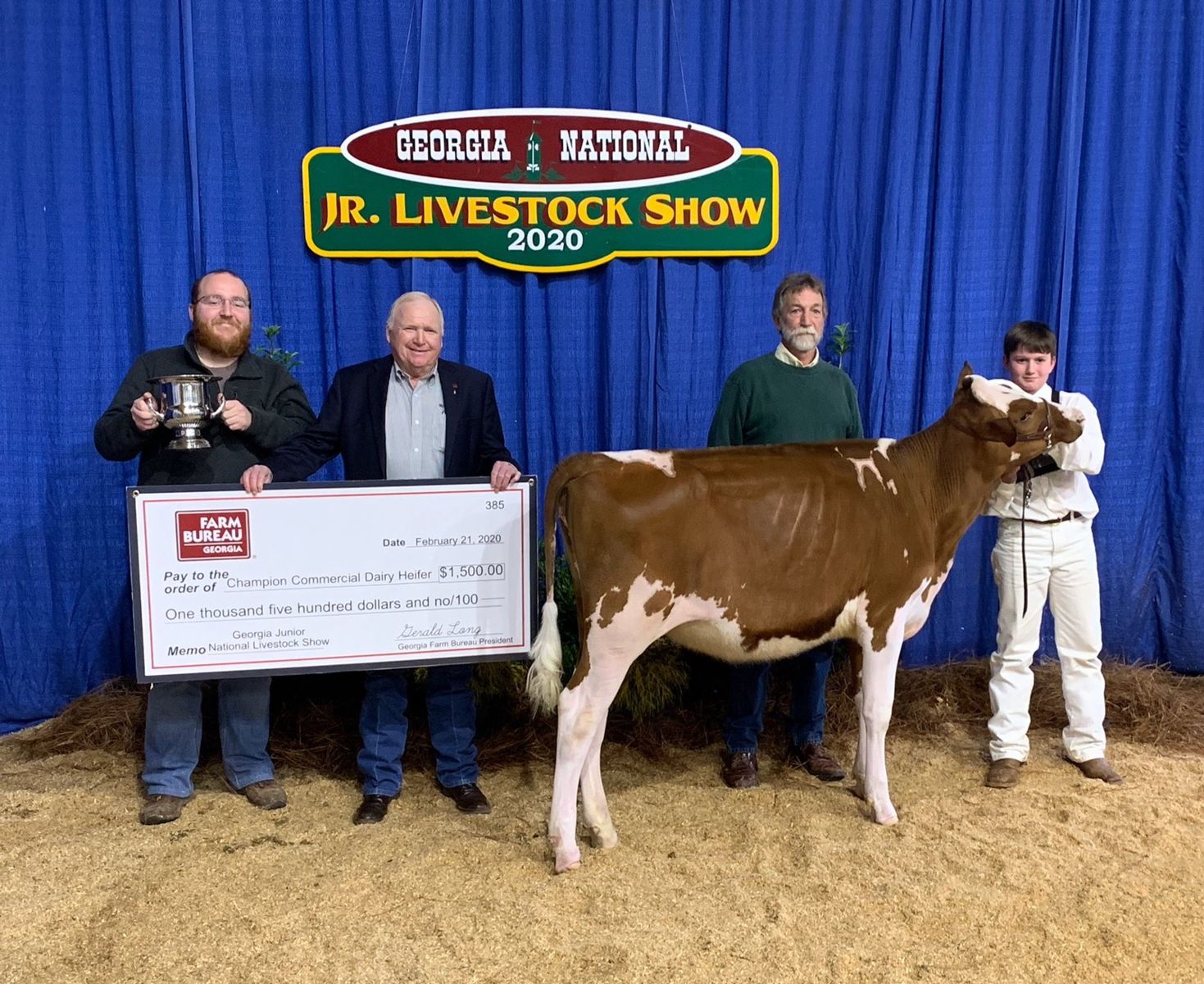 Michael Bushey was a sixth grade FFA member at Clear Creek Middle School in Gilmer County when he won the grand champion commercial dairy heifer with his red Holstein “Sassy.” The son of Michael and Terri Bushey, of Ellijay, this was the second year Bushey showed dairy heifers.

“I worked with Sassy every day for about forty to forty-five minutes - walking her around, setting her up (positioning the animal to best showcase its physical structure),” Michael said. “She was pretty hard to halter break.”

Michael’s winning heifer is the daughter of a red Holstein, Sally, that belongs to his older sister, Octavia, a rising junior who has shown dairy heifers for seven years.

Both Sally and her calf, Sassy, are descended from the red Holstein herd the Bushey siblings’ grandfather, Homer, once milked in Champlain, N.Y. 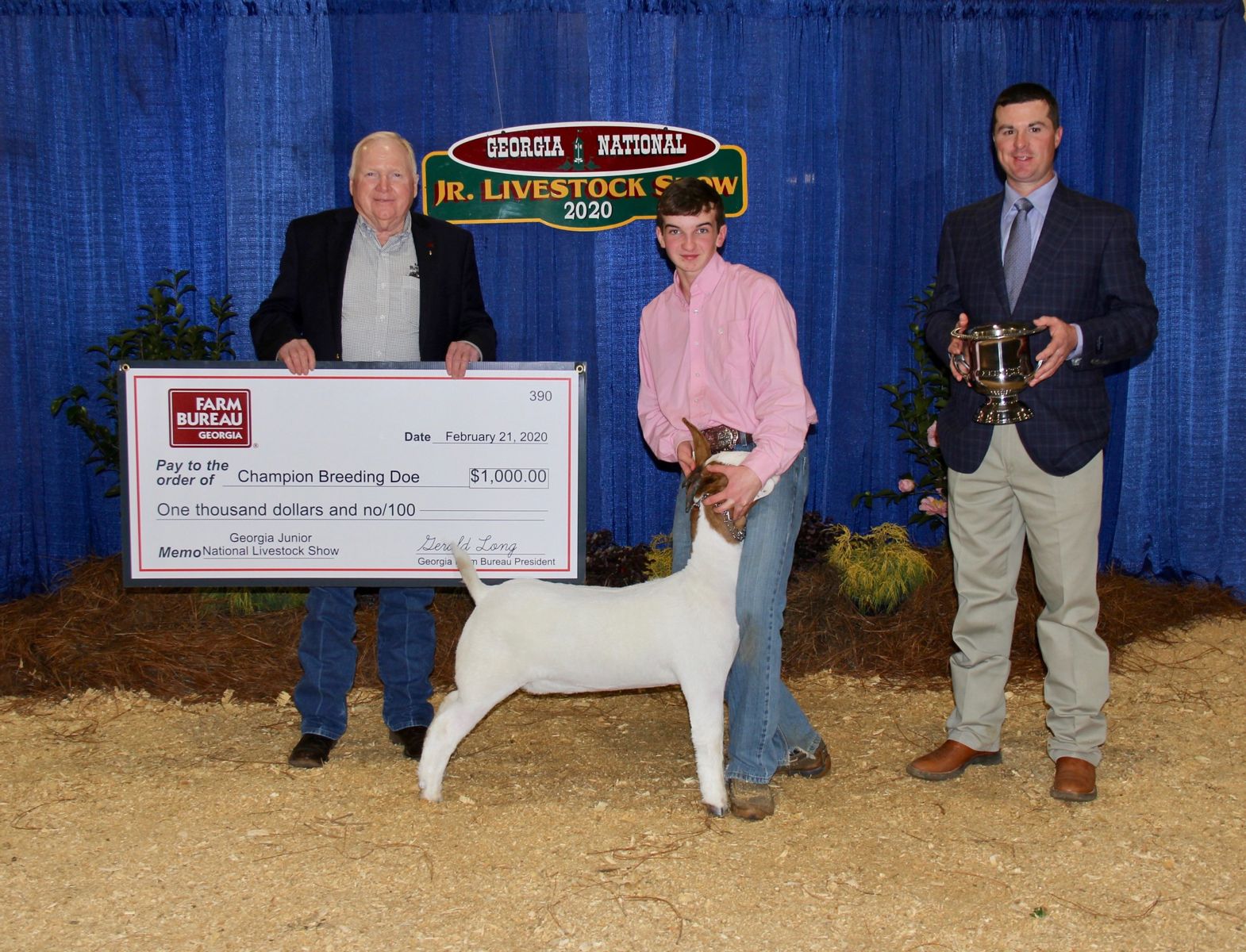 West, a junior when he won the award, has shown livestock for eight years. He also shows beef cows and pigs.

The son of Clay and Dedra West, of Cleveland, Casey says what he likes most about showing is meeting new people and  making new friends.

“I worked with my goat every day about 45 minutes,” Casey said. “I rinsed it, walked it, practiced bracing it (positioning the animal to show off its muscle). I was hoping she would win and she did!” 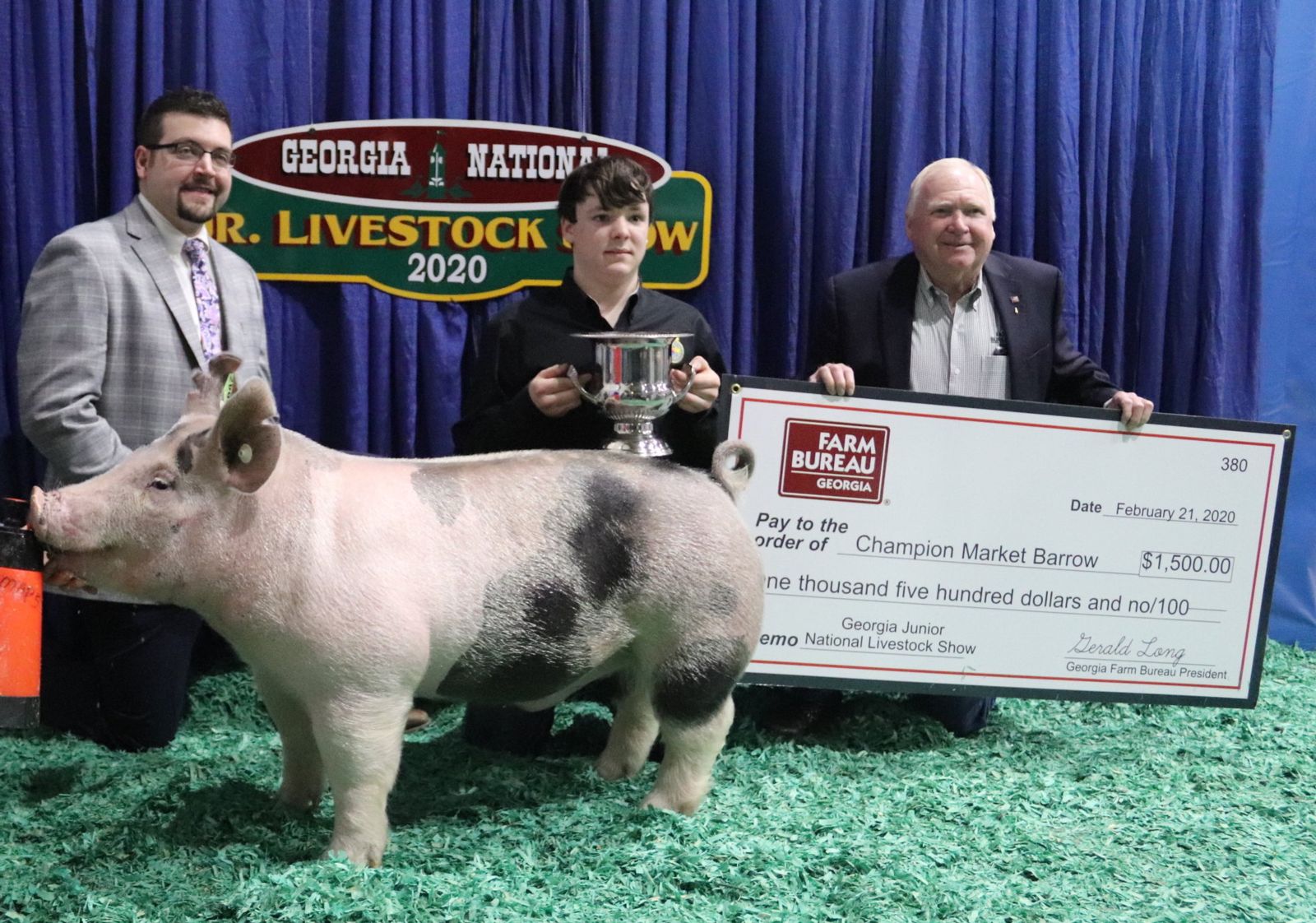 When asked what it takes to win a grand championship, Brock shared how he trained his winning hog.

The son of Jason and Kimberly Weaver of Norman Park, Brock, has shown livestock for seven years and shows cattle in addition to hogs.

The rising junior says, “being around a bunch of people I know,” and “being always on the move - staying out of trouble, basically,” are what he likes most about showing livestock. 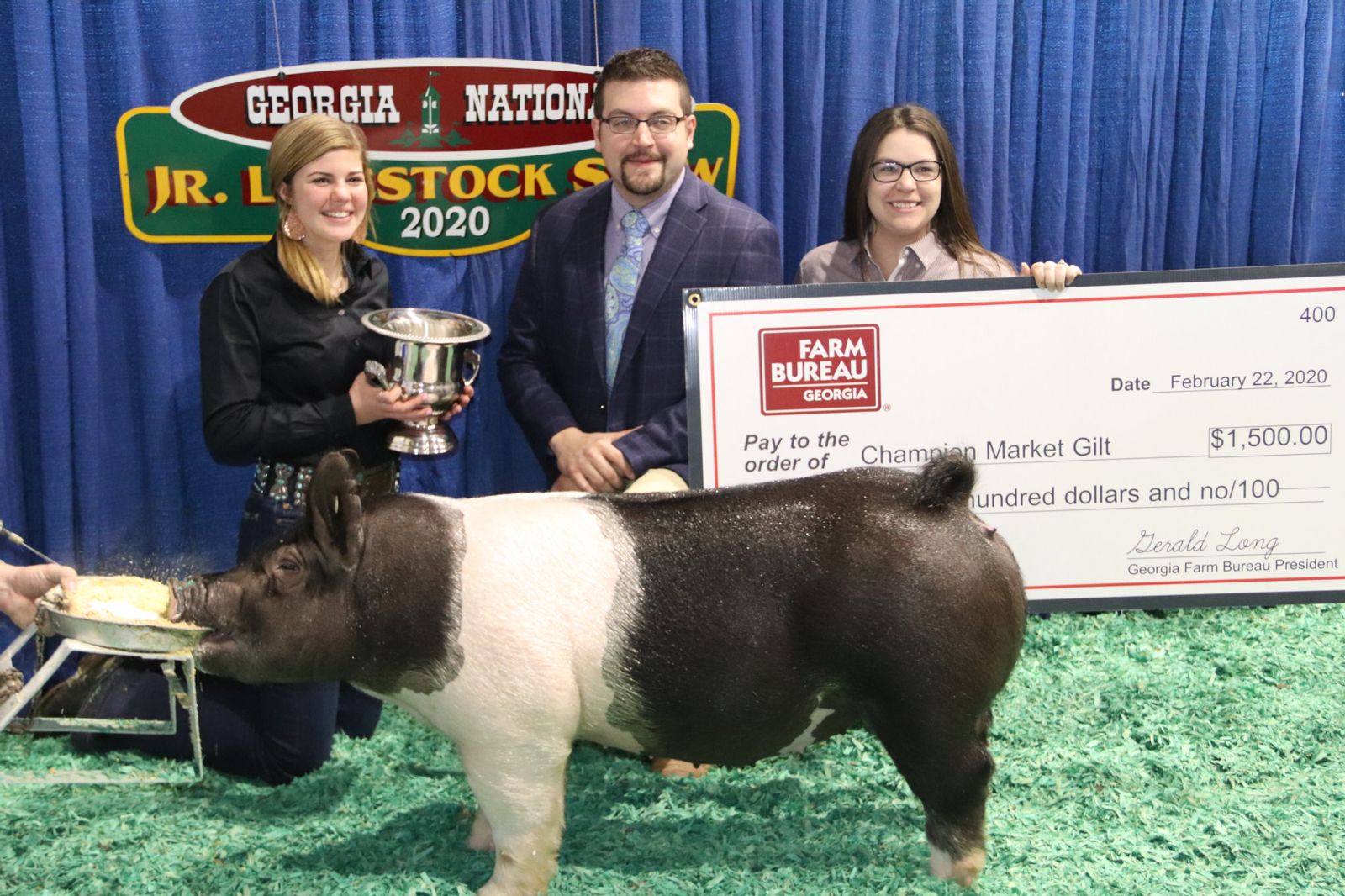 The daughter of Richie and Becca Turner, of Moultrie, Carolyne has focused on showing hogs for 11 years. This is the second grand  championship she’s won at the Ga. Jr. National having won the 2018 grand champion barrow award.

“It’s not just the winning. It’s more about people you meet and the lessons you learn. Like learning how to take care of things, learning how to lose gracefully and win humbly,” Carolyne said when asked what she likes most about showing. “I think this is probably the best thing that people can do.”

Carolyne admits she began showing due to her mom’s prodding but then fell in love with showing.

“She made me do it for the first few years. Then I just developed a passion for it, and 11 years later here I am. I’m the boss of a 280-pound animal,” Carolyne said. 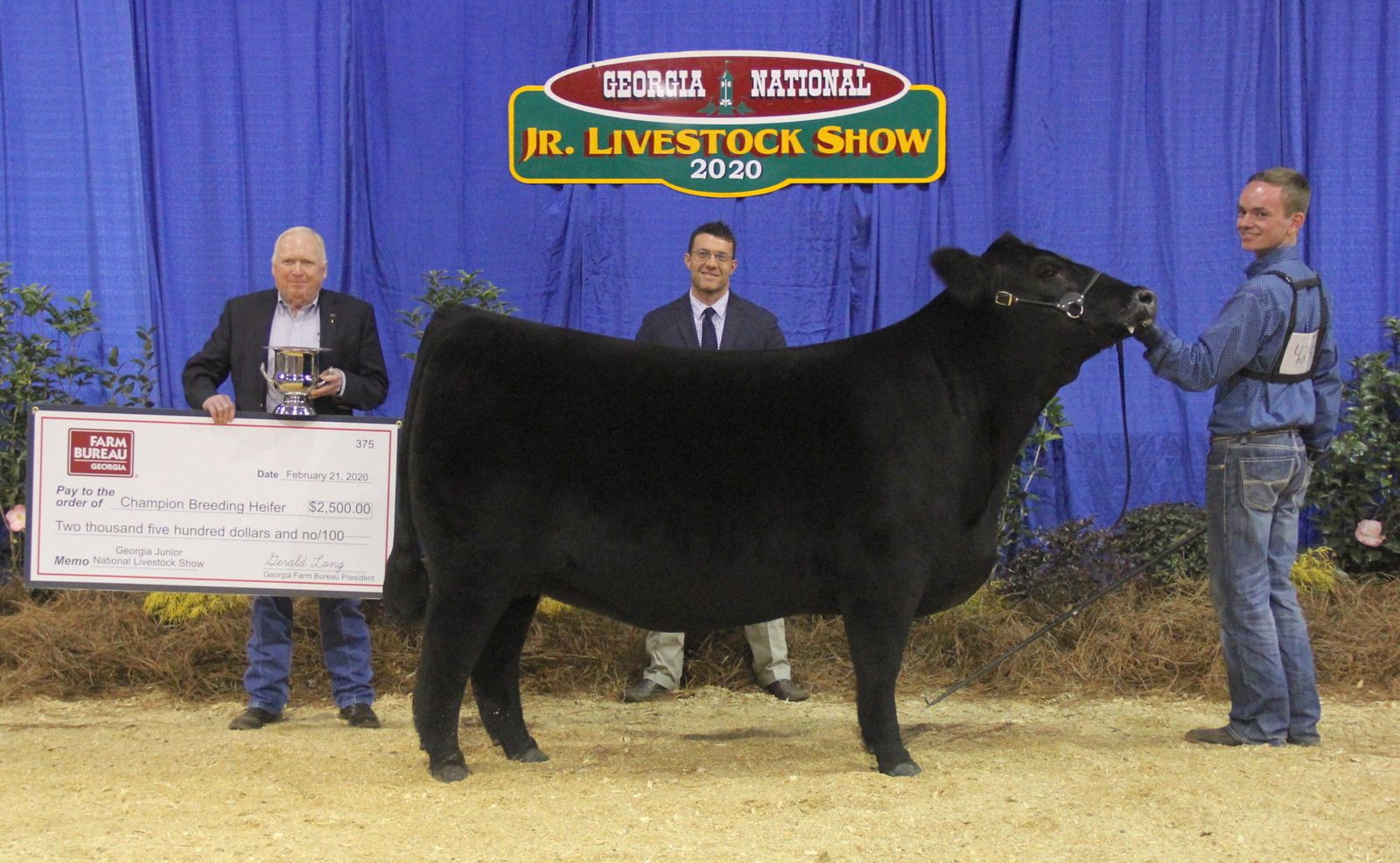 The son of Wayne and Carrie Ertzberger of Carnesville, Austin was a senior at Franklin County High School when he won the award.

Austin put in long hours to get to the winner’s circle with his heifer.

“I head out to the barn anywhere from five-thirty to six every morning and then work with my show calves twice each afternoon,” Austin said.

Judging by the long line of well-wishers who offered congratulations on his win, Austin earned more than just money and belt buckles from  showing.

“I’ve made my best friends doing this [showing],” Austin said. 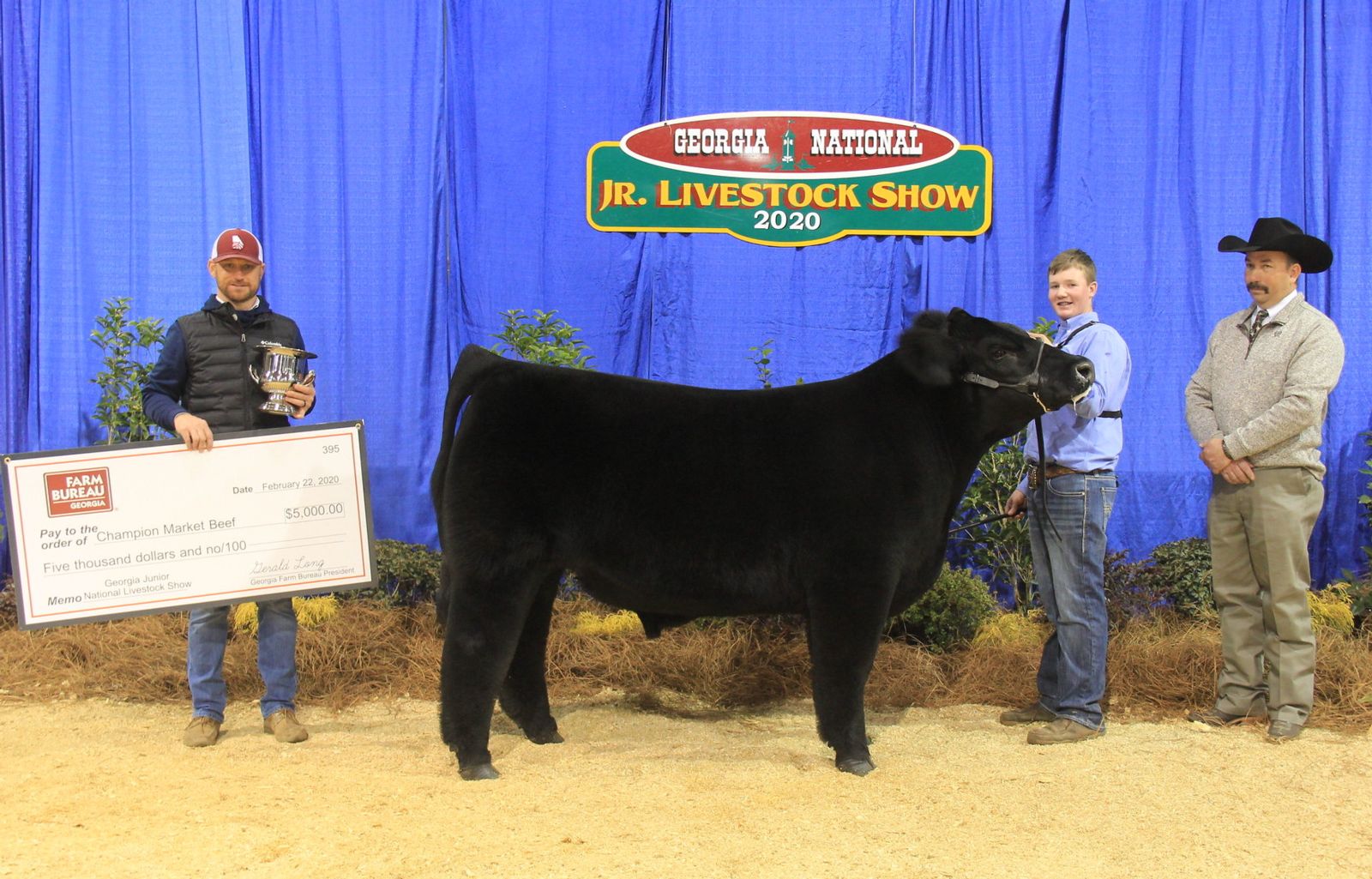 Grady County 4-Her Tanner Norton,  center, made show history by winning the first Ga. Jr. National Livestock Market Beef Cattle Show, in which exhibitors showed their market steers or market heifers. Previously only market steers competed for the grand champion market prize. Tanner won the show with a Maine-Chi-Angus crossbred steer that he says he picked for his heavy muscling and deep body.

“It’s harder to prepare steer [for showing],” Tanner answered when asked which species he found the hardest to show.

He was a freshman at Cairo High School in February.