For peanut growers, leaf spot isn’t the most front-of-mind challenge to growing a crop.

Tools to control leaf spot are readily available and are quite effective. The fungal disease and its prevention are simply part of the cost of doing business.

Still, that cost is significant.

“It is a concern,” said Georgia Peanut Commission Director Tim Burch, who grows peanuts and cotton on his Baker County farm. “Last year it didn’t hit as hard, but the previous two years it was a big issue. I used a full [fungicide] program. In ’18 I threw some more money at it late trying to stop it, but I had little success.”

The mingling of fungal diseases with peanut plants is inevitable without intervention, so much so that the UGA 2018 Peanut RX disease risk index refers to peanuts and fungal diseases as “an unavoidable union.”

Among those, leaf spot poses an ever-present threat.

“Every single field of peanuts in the U.S., even organic fields - and they would have lesser tools - every single one of them has to protect against leaf spot,” Kemerait said.

Leaf spot cost Georgia peanut growers an average of $34.6 million per year from 2005 to 2009 according to one UGA study. Left untreated, leaf spot can cut peanut crop yield by as much as 70%.

Is there a way to reduce or eliminate leaf spot costs?

Dr. Corley Holbrook is working to find one.

Holbrook, a peanut breeder with the USDA’s Agricultural Research Service (ARS) Tifton lab, has been crossbreeding peanuts for 35 years. Variety development, using a technique called backcross breeding, can take 10 years or more before the desired combination of traits is achieved. 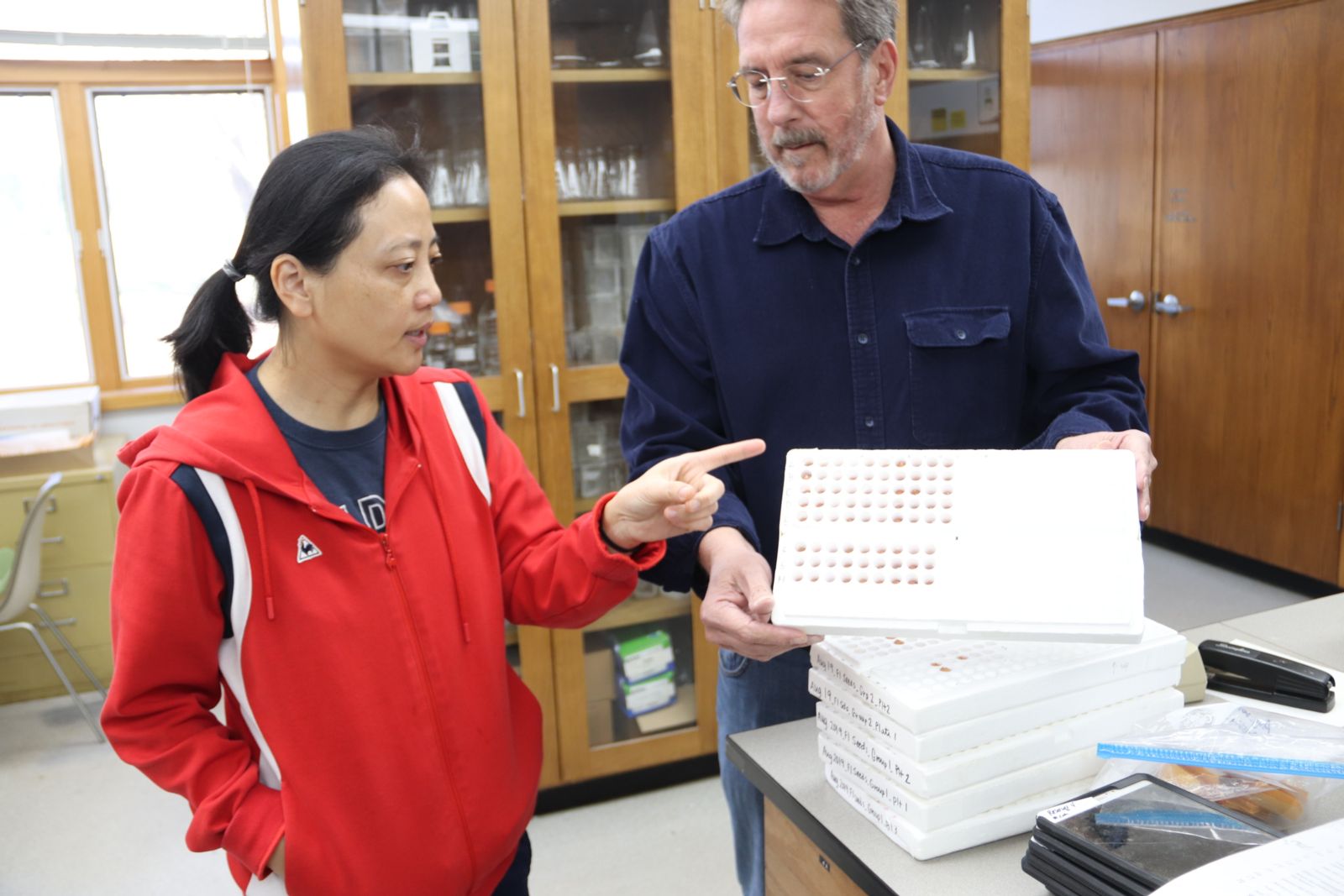 UGA researcher Dr. Juliet Chu, left, and USDA’s Dr. Corley Holbrook discuss a breeding sample tray used in the process of marker-assisted selection. Each peanut in this tray is from a breeding line in the leaf spot study. A part of each peanut will be shaved off to extract and analyze DNA for presence or absence of certain traits.

In Holbrook’s study, this involves crossing a high-yielding variety (TifNV-High O/L) with a breeding line variety resistant to a specific crop stressor, like the fungus that causes leaf spot. Unfortunately, this cross does not produce acceptable yields.

A high-yielding peanut variety crossed with one that doesn’t yield well but is resistant to leaf spot results in a 50/50 distribution between the two varieties.

Then, the original high-yielding variety is bred again, this time with the product of the first pairing, which expands the genetic contribution of the high-yield variety to 75%. This is the first backcross.

Successive backcrosses increase the genetic contribution of the high-yielding variety by half each generation.

In the case of leaf spot, Holbrook said the first or second backcross could produce a leaf spot-resistant variety with outstanding yield and grade.

Until the last decade, the process was limited by the growth cycle of the plant; in peanuts this meant growing crossbred plants to maturity.

Then the new variety was replanted, grown to maturity and tested. Then the entire cycle started over for the next-generation backcross.

In 2004, the American Peanut Council (APC) authorized the Peanut Foundation to set up a coordinated research effort to cut production costs while improving yield and quality. At the same time, researchers were tasked with reducing the time it took to develop new peanut varieties, which at that time was 12 to 15 years.

This effort resulted in the establishment of the International Peanut Genome Initiative (IPGI).

Peanuts were struggling to compete with other crops, particularly corn, cotton and soybeans, all of which were, at the APC’s estimate, 6 to 10 years ahead of peanuts in variety development. Peanut breeders by 2010 had identified about 6,000 DNA molecular markers (fragments of DNA associated with specific traits). Not many were related to desired traits like drought tolerance or disease resistance. More than 100,000 useful DNA markers had been identified in corn and soybeans.

“We knew these tools would need to be applied to peanut, as well, to keep peanut improvement moving at the pace of other crops, so that it keeps peanut competitive and makes use of the newest breeding technologies,” said Dr. Peggy Ozias-Akins, director of the National Environmentally Sound Production Agriculture Laboratory (NESPAL) on the campus of UGA-Tifton.

According to Ozias-Akins, who co-chaired the IPGI executive committee along with Holbrook, there were scattered peanut genome-mapping studies being done before, but the research was extremely costly and no large-scale genome studies were underway.

IPGI has already developed a suite of DNA markers for nematode resistance, as well as the variety TifNV-High O/L, which Holbrook developed in partnership with Ozias-Akins.

Collectively, these markers along with others could be used to combine, or stack, multiple traits. This process is referred to as breeding with marker-assisted selection, and it was one of three possible genetic research processes suggested for IPGI’s work. The other two, genetic modification (GMO) and mutation breeding, came with what the Peanut Foundation referred to as “significant drawbacks.”

The IPGI arranged a collaborative effort that included 135 researchers at 79 institutions in 20 countries. The APC and the Peanut Foundation provided $6 million over five years for the research.

Using information from the genome, Holbrook and his cooperators at the ARS and UGA labs in Tifton only have to grow enough plant material to extract DNA.

“In the past we would make a cross and then allow it to self-fertilize for a few years to produce progeny to test to see which one should be used in a backcross.” Holbrook said. “You may be three or four years down the road before making a backcross.  Now we can immediately begin the backcross because we have molecular markers.”

So now the process of a cross and three backcrosses only takes around five years, making nonchemical solutions for disease control available faster.

“It could cut our costs $50 an acre probably,” Burch said. “It would definitely reduce it.”

Leaf spot was among the crop stressors the APC originally identified for targeted research, but it was not the only one.

“You know, there’s a lot of discoveries that are just waiting to be made in terms of disease resistance, but other traits like quality and even more complex traits in peanut, like flavor, that we don’t know a whole lot about, at least genetically, at this point,” Ozias-Akins said.